Nonresidential construction spending fell 0.6% in November 2012 but is up 2.9% year-over-year 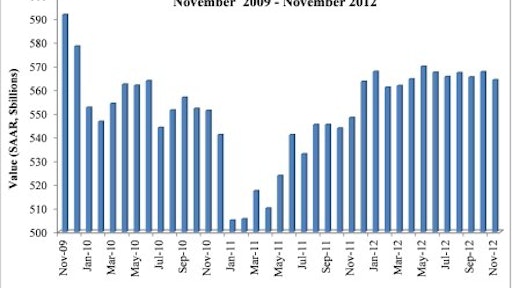 Construction sectors with the largest year-over-year decreases in spending include:

Only four nonresidential construction sectors posted increases for the month:

Seven sectors maintained spending above levels from one year ago:

Residential construction spending increased 0.4 percent for the month and is up 18 percent from the same time last year.

Overall, total construction spending - which includes both nonresidential and residential spending - was down 0.3 percent for the month and is up 7.7 percent compared to November 2011.

“ABC’s 2013 construction forecast has remained consistent with the notion that America would not fall off her fiscal cliff and construction momentum would be renewed by the latter part of next year,” Basu said. “What has transpired in the last few days indicates that this forecast remains likely to come true.”

List of Improving Housing Markets Surges 20% to 242 in January