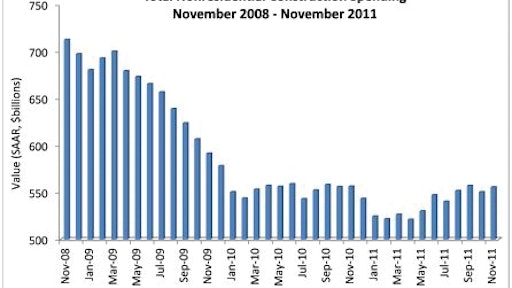 Total nonresidential construction spending increased 0.9 percent in November to a seasonally adjusted annual rate of $555.7 billion, according to the Jan. 3 report by the U.S. Commerce Department. However, total nonresidential spending is down 0.1 percent from one year ago.

Nine of the sixteen nonresidential construction subsectors posted increases in spending for the month, including:

Four subsectors experienced increases in spending from one year ago, including:

Seven nonresidential construction subsectors had decreases in spending for the month, including:

Twelve subsectors are down from November 2010, including:

“It should be noted that these data are seasonally adjusted, which means they attempt to account for seasonal weather conditions,” said Basu. "Because November was unusually mild in much of the nation, the improvement in nonresidential construction spending may at least be partially attributable to weather rather than economic factors.

“In addition, December was also unusually temperate, with the implication being that next month’s report may also be positive,” Basu said.