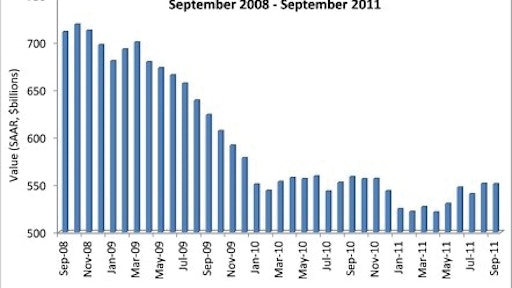 Eight nonresidential construction subsectors had decreases in spending for the month, including conservation and development, down 7.7 percent; public safety, 4.9 percent lower; water supply, down 2.4 percent; and transportation, down 2.3 percent. With spending down in the majority of nonresidential construction subsectors year-over-year, those posting the largest declines include lodging, down 18.8 percent; religious, 16.7 percent lower; sewage and waste disposal, down 13.1 percent; amusement and recreation, 12.3 percent lower; and water supply construction, down 12.1 percent.

"This appears to be what occurred in September. Many of the segments experiencing the largest declines in nonresidential construction were those heavily financed and demanded by the public sector," said Basu. "In contrast, privately financed construction continues to expand, such as commercial and manufacturing construction.

"Industry stakeholders can expect continued growth in health care construction for demographic and policy reasons, as well as in communications construction for reasons related to new technology and customer demand," Basu said.

"For now, the pace of recovery for the nation's construction industry remains soft," said Basu.