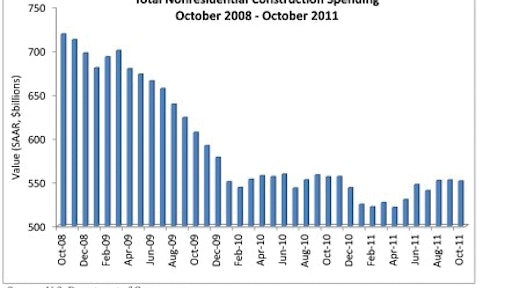 "Power construction continues to lead the way and its impact in the industrial sector is gaining momentum," said Basu. "However, many private segments have come to reflect the economic weakness experienced earlier this year, including communication, lodging and health care construction.

"It is quite likely that weakness in many privately financed construction segments will continue as a reflection of the soft patch that undermined economic process in early 2011," Basu said. "Still, the rapid pace of economic progress presently being observed should translate into meaningful construction spending recovery some time next year.

"This, of course, presumes that the current pace of economic progress persists," said Basu. "The construction outlook is a messy one, with the expectation being that construction volume may slip for several months before stabilizing and beginning a sustained recovery in earnest."