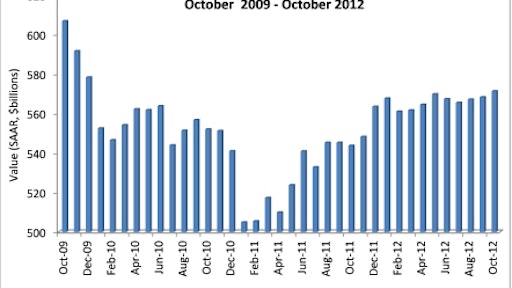 Total nonresidential construction spending increased 0.5% to $571.3 billion in October 2012 and is up 5.1% compared to one year ago.

Eleven of 16 nonresidential construction subsectors posted increases in October including:

In contrast, five construction subsectors posted decreases in spending for the month including:

Residential construction spending jumped 3 percent for the month and is up 19.4 percent from the same time last year.

Total construction spending - which encompasses both nonresidential and residential spending - was up 1.4 percent for the month and is up 9.6 percent compared to October 2011.

“As the nation approaches its fiscal cliff - a collection of tax increases and spending cuts that kick in at the end of the year - the pattern of recovery in nonresidential construction spending has shifted,” said Associated Builders and Contractors Chief Economist Anirban Basu. “Earlier this year, private sector nonresidential construction spending growth was more robust but has since declined.

“This comes as little surprise as more projects are being put on hold,” Basu remarked. “The possibility of going over the cliff has dampened the pace of recovery.

“Transportation and water supply have been among the main public sector spending drivers,” Basu said. “This rise in spending is attributable to a combination of factors, including steadily improving state and local government budgets in much of the nation and ongoing investment in several large transportation-related construction projects across the U.S.

“There are two likely scenarios for nonresidential construction spending in the United States,” Basu said. “Both scenarios hinge upon the outcome of the fiscal cliff debate.