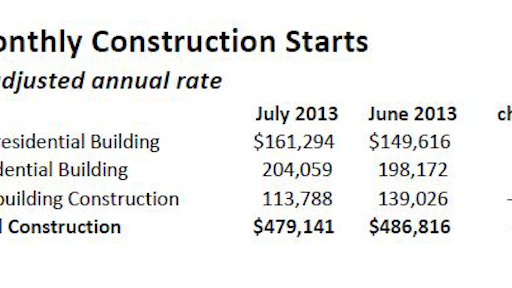 New construction starts in July decreased 2% to a seasonally adjusted annual rate of $479.1 billion, according to McGraw Hill Construction.

Nonbuilding construction, comprised of public works and electric utilities, pulled back in July after being lifted in June by several very large projects. At the same time, nonresidential building regained some of the upward momentum in July that began in April and May. Residential building in July showed further growth.

“July’s modest decline for total construction was the result of diminished activity for public works, which can be volatile on a month-to-month basis depending on the timing of very large projects,” stated Robert A. Murray, vice president of economic affairs for McGraw Hill Construction. “Aside from the public works shortfall, the July statistics provided evidence that the hesitant expansion for construction is proceeding. Housing continues to show upward movement, and the pace of commercial building continues to pick up gradually from very low levels. The institutional building portion of nonresidential building, which generally weakened during the first half of 2013, strengthened in July, suggesting that it may now be starting to stabilize after a lengthy decline that’s lasted for more than four years.

"While the recovery for construction may be broadening in scope, the process continues to be tenuous given the ongoing sluggish condition of the U.S. economy.”

The transportation-terminal category in July surged 111%, helped by the start of the $650 million Central Subway Station in San Francisco CA and $105 million for work at Terminal 3 at San Francisco International Airport.

The public buildings category, which has recently been very weak, jumped 46% in July with the start of a $137 million renovation project at the Minnesota State Capitol Building in St. Paul MN.

Educational facilities, the largest institutional category, also contributed in July with a 3% increase, rising for the second month in a row after weak activity in early 2013. Large educational facility projects that were included as July starts included $218 million for Phase 3 of the University of Maryland Health Sciences Research Facility in Baltimore MD, a $92 million high school in Concord MA, and an $85 million high school addition in Bellevue WA.

Institutional categories that weakened in July were churches, down 3%; and amusement-related construction, down 7%.

The commercial categories slipped 2% in July due to varied behavior by project type.

Office construction dropped 15%, although following a 44% leap in June. The level of activity in July was 21% higher than the average monthly pace for this category for all of 2012.

Large office projects that were included as July starts included $550 million for the office portion of the State Farm Headquarters complex in Richardson TX, plus two office buildings for Amazon in Seattle WA valued respectively at $133 million and $111 million.

Hotel construction in July fell 30%, after an elevated pace earlier in the year.

Store construction in July edged up 2%, helped by the start of a $70 million IKEA store in Merriam KS, while warehouse construction climbed 36%.

Residential building grew 3% in July, to a $204.1 billion annual rate. Multifamily housing rebounded 20% after sliding 21% in June, regaining the its pace from earlier in 2013.

Through the first seven months of 2013, the leading metropolitan areas for multifamily construction starts (ranked by dollar volume) were:

Single family housing in July slipped 1%, and over the past several months has essentially leveled off after the strong month-to-month gains that were reported throughout 2012 and early 2013. July’s volume of activity was still high by last year’s standards – up 26% from the average monthly pace for single family housing reported during 2012.

By region, single family housing in July showed greater activity in the Midwest, up 4%; but declines in the Northeast, South Central, and West, each down 2%; and the South Atlantic, down 4%.

“The rise in mortgage rates in late spring generated some concern about the prospects for single family housing," said Murray, "but mortgage rates have since eased back and the inventory of new homes for sale remains very low, which should encourage greater single family construction in the months ahead.”

The public-works portion of nonbuilding construction fell 20% in July, retreating after its 40% June surge.

Bridge construction in July was down 54%, following the robust amount of construction starts in June that included $1.6 billion for work on the Ohio River Bridges in the Louisville KY and the southern Indiana area, plus several other large bridge projects located in Massachusetts, Texas, and New York.

Highway construction also pulled back from an elevated June, sliding 22%. Even with the reduced activity reported during July, highway and bridge construction through the first seven months of 2013 still maintained a 12% lead over the same period a year ago.

Public-works categories that showed greater activity in July were

The electric utility and gas-plant category managed to increase 11% in July from very weak activity in June, helped by the start of a $270 million gas plant in Colorado and a $200 million solar power plant in New Mexico. The amount of electric utility and gas plant construction continues to be much lower than last year, with July’s volume down 82% from the average monthly pace for this category during 2012.

The 1% increase over 2012 levels for year-to-date total construction starts (unadjusted) was the result of divergent behavior by the three main construction sectors:

By geography, total construction starts in the first seven months of 2013 revealed gains in three regions – the West, up 9%; and the South Central and the Northeast, each up 8%.  Year-to-date declines were reported in the Midwest, down 1%, and South Atlantic, down 14%. If electric utilities are excluded from the construction start statistics in the South Atlantic, then that region would register a 20% year-to-date gain.

Construction Spending Down in June 2013