Overall, CBI now stands at 8.1 months — down from the 8.3 months in the previous quarter but up from 7.9 months a year ago 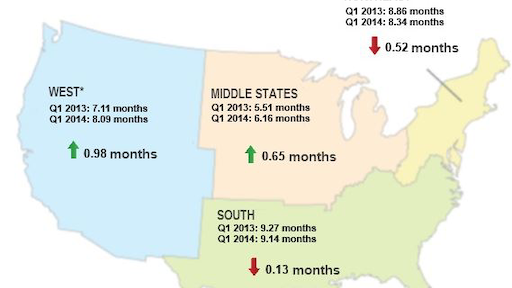 Average backlog declined in three of four regions during the first quarter.

Harsh winter weather helped produce a 2.8 percent decline in Associated Builders and Contractors' (ABC) Construction Backlog Indicator (CBI) during 2014's first quarter. The weather also impacted construction starts, architectural billings and many other construction-related metrics. Overall, CBI now stands at 8.1 months—down from the 8.3 months in the previous quarter, but up from 7.9 months a year ago.

"Despite a decline in overall backlog, only one of three industry segments, commercial/institutional, saw a decrease in backlog during the first quarter," said ABC Chief Economist Anirban Basu. "Retailers and other commercial actors have been seeking to build cash reserves rather than to expand operational capacity, which helps explain the decline. However, second quarter business spending appears to be on the rise. Many companies are flush with cash and small business confidence is improving, which means commercial backlog is expected to expand during 2014's second quarter and likely beyond.

"Regionally, the West, which features many of the states hardest hit by recession, including Arizona, California and Nevada, was the only region to experience expanding backlog," said Basu. "The South, which includes rapidly growing states like Texas and Florida, continues to post the lengthiest average backlog, while the Middle States region, which includes communities with highly constrained public budgets like Chicago and Detroit, has the shortest construction backlog.

"Firms in three of the four size categories experienced an increase in average contractor backlog," said Basu. "Larger firms, which generally have the greatest access to capital and therefore are more likely to be able to take on projects, continue to enjoy the lengthiest backlog. Backlog among smaller firms is roughly where it was at the end of 2011, leading many of those firms to offer bids with low profit margins in an attempt to line up additional work.

Read more about the latest CBI.

Is US Housing Construction Stalling?