Third-Quarter U.S. GDP Revised Up for Strongest 6 Months in a Decade 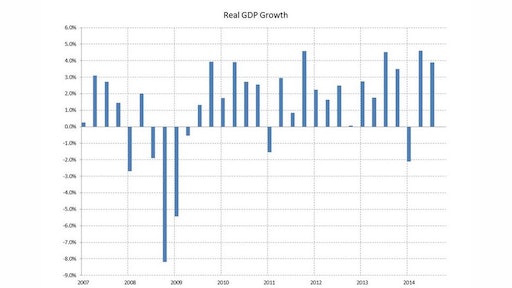 The U.S. Bureau of Economic Analysis (BEA) released its second estimate of real GDP growth for the third quarter. Growth in economic output was revised upward to a seasonally adjusted annual rate of 3.9% from 3.5% in the advance estimate. The pace was 4.6% in the second quarter.

Third-quarter strength followed a 4.6% surge in the spring, creating the biggest consecutive quarters of U.S. economic growth since 2003.

Upward revisions to investment, both fixed and inventory, and personal consumption expenditures were partially reduced by downward revisions to net exports and state and local government spending. More investment and personal consumption bode well for momentum in future quarters, softer exports and state and local government spending, less so. The large jump in federal defense spending was unrevised and points to a drag on growth in future quarters.

Despite the slowdown from the second quarter, this is a promising upgrade from the advance estimate. Stronger growth and stronger composition of growth tilt the odds of momentum from maybe to probably