In spite of the overall positive trend in architectural billings activity, there continues to be significant regional diversity 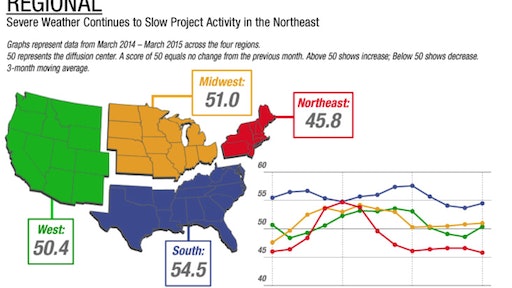 Firms in the Midwest, South, and West all reported growth in billings in March, with all three regions seeing acceleration over February levels. However, firms in the Northeast reported relatively steep declines, with the string of weak numbers extending to seven straight months for firms in this region.

After disappointing results in January and February, billings at U.S. architecture firms showed some signs in March of emerging from their winter doldrums. The national Architecture Billings Index score for the month was 51.7, up from 50.4 in February. More encouragingly, inquiries for new project activity showed a healthy gain, while the index score for new design contracts rebounded to 52.3 after reporting no gain with a 50 score in February.

In spite of the overall positive trend in billings activity, there continues to be significant regional diversity. Firms in the Midwest, South and West all reported growth in billings in March, with all three regions seeing acceleration over February levels. However, firms in the Northeast reported relatively steep declines, with the string of weak numbers extending to seven straight months for firms in this region. Hopefully this downturn will turn out to be a weather-related seasonal episode, in which case we would expect to see growth resuming over the next few months.

By sector, institutional activity continues to recover at a very healthy pace. The Architectural Billings Index (ABI) for institutional firms was 53.2 for March, and the tenth straight month of growth for this sector. For the past two months, institutional firms have been reporting the strongest growth of any building sector, which holds out promise of a healthy institutional construction market later this year. Commercial firms are also seeing improvement, as the ABI score for these firms was 53 for March, reflecting the strongest upturn in billings of the past 18 months. Moving in the other direction, though, is residential firms, which have reported modest billings declines for the past two months.

Last year, severe winter weather got the economy of to a slow start. Economic output shrank by more than 2 percent in the first quarter, but then accelerated over the last three quarters. Overall economic growth increased 2.4 percent for the year, better than the performance in either 2012 or 2013.

This year is shaping up as a carbon copy. The first quarter is likely to produce very little if any growth, again due to extreme weather conditions in many parts of the country. However, the rest of the year is expected to generate strong growth, with the expectation that the economy will expand as much if not more than it did last year.

However, there are a new set of issues that the economy will be dealing with this year. Falling energy prices have depressed exploration activity, and have hurt the local economies in areas that are dependent on energy production. The upside, however, is that consumers will be paying less for gasoline this year, which gives them more money to spend on other things. Additionally, the availability of construction labor is shaping up to be a major issue this year. The construction labor force currently has about 1.5 million fewer workers than it did during the last construction boom. Many moved onto other industries, while others left the labor force altogether. As the industry continues to recover, attracting labor back into the industry is shaping up to be a serious challenge.

Interest in sustainable design expected to grow in the coming years

Architecture firms report that building sustainability concerns remain a relatively high priority for many of their clients. However, priorities vary a lot across the diverse sustainability areas. Specific areas covered in this survey include: energy efficiency; water efficiency and conservation; healthy buildings/indoor air quality/indoor environmental quality; use of recycled products; use of rapidly renewable products; and renewable energy.

Over two-thirds of respondents indicated that their clients place a high or moderately high priority (independent of local code requirements) on energy efficiency. However, client priority fell off for other sustainability concerns. Fewer than half of respondents (48 percent) felt that their clients had high of a priority for healthy buildings concerns; a share that dropped to just over a third for water efficiency (35 percent); down to 22 percent for renewable energy; 20 percent for recycled products; and only 9 percent for use of rapidly renewable materials.

When asked to rank the sustainability categories that clients place among the highest three in terms of priority, almost all respondents (91 percent) listed energy efficiency, while 58 percent of respondents listed healthy buildings as one of the top three sustainability priorities for clients. That was followed by water efficiency (36 percent) and renewable energy (25 percent).

However, when asked to feel how these priorities might look to clients in five to ten years, the rankings shifted. Energy efficiency was still high on the list as one of the top three priorities (mentioned by 85 percent or respondents), as was healthy buildings (mentioned by 60 percent). However, both water efficiency (60 percent) and renewable energy (44 percent) were predicted to be much higher priorities in the eyes of clients in five to ten years than they were at present.