New Construction Starts Up 10% in April

Through the first four months of 2015, construction starts are up 24% compared to the same period in 2014 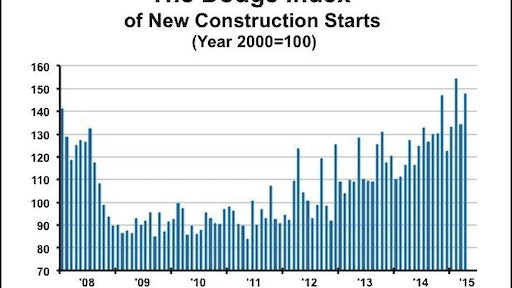 The value of new construction starts in April increased 10% from the previous month to a seasonally adjusted annual rate of $698.7 billion raising the Dodge Index to 148 compared to 134 in March 2015.

The value of new construction starts in April increased 10 percent from the previous month to a seasonally adjusted annual rate of $698.7 billion, according to Dodge Data & Analytics. The nonresidential building sector came in particularly strong, lifted by the inclusion of two massive projects as April starts — an $8.1 billion petrochemical plant in Louisiana and a $1.2 billion office/retail high-rise in New York. Meanwhile, residential building slipped in April, and nonbuilding construction lost momentum as the result of a pullback by public works. Through the first four months of 2015, total construction starts on an unadjusted basis were reported at $208.2 billion, up 24 percent from the same period a year ago. The current year has so far witnessed the start of eight massive projects valued each in excess of $1 billion, compared to four such projects during the corresponding period of 2014. Excluding projects in excess of $1 billion, the result for total construction starts would be a 3 percent decline in April on a seasonally adjusted basis compared to March, and a 10 percent gain during the first four months of 2015 on a raw (unadjusted) basis compared to last year.

The April statistics raised the Dodge Index to 148 (2000=100), compared to 134 in March. For the full year 2014 the Dodge Index averaged 124. "The presence of unusually large projects in early 2015, particularly several liquefied natural gas (LNG) terminals and several petrochemical plants, has elevated the level of activity shown by total construction starts beyond the underlying trend," stated Robert A. Murray, chief economist for Dodge Data & Analytics.  "It's also increased the volatility on a month-to-month basis, with total construction up 16 percent in February, down 13 percent in March and now up 10 percent in April. Despite these wide swings on a monthly basis, it's still possible to identify several aspects of how the construction expansion is proceeding in 2015. For nonresidential building, the upturn is broadening in scope, with its institutional segment continuing the upward movement established in 2014. For residential building, single family housing has shown some improvement yet remains hesitant, while multifamily housing is generally proceeding at a healthy clip. For nonbuilding construction, the electric power and gas plant segment has provided a substantial near term boost that will soon recede, while public works is beginning to face constraints after surprisingly resilient activity in early 2015."

Nonresidential building in April jumped 58 percent to $288.9 billion (annual rate). Much of the lift came from the manufacturing plant category, which soared 516 percent due to $8.1 billion estimated for the Sasol ethylene cracker and derivatives complex in Louisiana. If this massive project is excluded, the manufacturing plant category in April would have been down 34 percent, while total nonresidential building would have seen a more moderate increase of 5 percent.

Aside from the Sasol project, the manufacturing plant category in April included the start of two tire manufacturing plants, one in Tennessee at $384 million and another in South Carolina at $150 million, as well as a $300 million ammonia production facility in Wyoming.

The institutional building group in April grew 7 percent, bouncing back after an 8 percent slide in March. Educational facilities increased 9 percent, helped by such projects as a $132 million building addition at Texas A&M University in College Station, Texas, a $99 million public school renovation in New York, and a $90 million facility at Omaha Metropolitan Community College in Omaha, Neb.

Through the first four months of 2015, the top five states in terms of new educational facility starts were :

The transportation terminal category jumped 33 percent in April, reflecting the start of a $405 million renovation project at Grand Central Terminal in New York and $403 million for airport terminal work at Orlando International Airport in Orlando.

Healthcare facilities advanced 18 percent after a weak March, helped by groundbreaking for a $225 million hospital in Gainesville, Fla., and a $100 million addition to a medical center in Omaha. The amusement and recreational category registered a 15 percent gain in April, boosted by the start of a $450 million sports arena for the Detroit Red Wings in Detroit.

Losing momentum in April were public buildings (courthouses and detention facilities), down 21 percent; and religious buildings, down 57 percent.

Residential building, at $245.1 billion (annual rate), slipped 3 percent in April. Single family housing retreated 4 percent following its slight gain in March, still holding to the sluggish performance that took hold at the end of 2013.  By geography, single family housing in April experienced diminished activity in the South Central, down 12 percent; and the West, down 5 percent; while the South Atlantic held steady and modest gains were reported in the Midwest, up 2 percent; and the Northeast, up 3 percent.

Multifamily housing in April eased back 2 percent, retreating slightly for the second straight month after a 40 percent surge in February. In April there were nine multifamily projects valued at $100 million or more that reached groundbreaking, led by $563 million for the multifamily portion of a $600 millionmultifamily/retail building in New York.  Of these nine projects, seven were located in the New York metropolitan area while the other two were located in Seattle and Dallas.

Through the first four months of 2015, the top five metropolitan areas in terms of the dollar amount of multifamily starts were:

Nonbuilding construction in April dropped 17 percent to $164.7 billion (annual rate). Following a sharp 33 percent gain in March, the public works categories as a group retreated 26 percent. Highway and bridge construction pulled back 31 percent, after being lifted in March by the start of the $2.3 billion I-4 upgrade in central Florida. Compared to March, the large highway and bridge projects in April were smaller in scale, such as the $260 million upgrade to I-84 in Waterbury, Conn.

Even with its April decline, the miscellaneous public works category did include $690 million for the start of rail-related work for the segment of the California high-speed rail project located in the Fresno, Calif., area.

In contrast to the downturn for public works in April, the electric utility and gas plant category strengthened 25 percent after a steep 73 percent plunge in March. Large electric power projects that were reported as April starts included a $1.0 billion solar power facility in Blythe, Calif., and an $800 million natural gas-fired power plant in Carrollton, Ohio. There were also four large wind power projects included as April starts, with two located in Colorado (valued at $400 million and $200 million respectively), one in New Mexico ($430 million), and one in Oklahoma ($400 million).

The sharp increase for nonbuilding construction year-to-date was largely the result of four massive LNG terminal projects reported as construction starts in January and February.

By geography, total construction starts during the January-April period of 2015 performed as follows:

By geography, the 12 months ending April 2015 revealed the following for total construction starts versus the prior 12 months: