Growth in building-project planning for two months -- Dodge Momentum Index is 20.6% higher than last year -- bodes well for construction spending through the first half of 2016 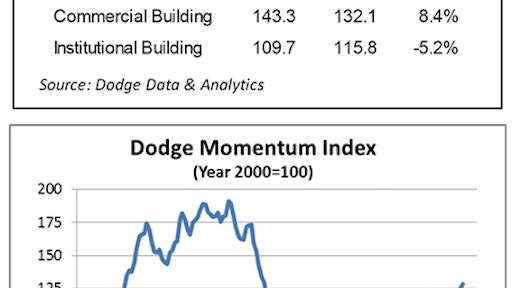 Planning data was weak at the start of the year but grew in July and August in response to improving economic data and real estate market fundamentals, which bodes well for construction spending through the first half of 2016.

There were a total of ten projects entering planning in August with a value that exceeded $100 million – eight commercial projects and two institutional projects. In the commercial building sector, a $500 million mixed-use project in Santa Clara CA, a $400 million hotel at JFK International Airport in New York NY, and a $350 million warehouse in Orlando FL entered planning. Within the institutional building sector, a $400 million hospital in Phoenix AZ and a $150 million assisted living facility in Seattle WA entered planning.

New Construction Starts Up 10% in April