A 0.8% rise in Dodge’s index of building-construction planning hints at stabilization in commercial and industrial sectors 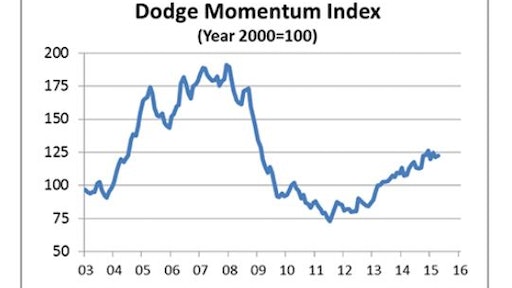 April’s timid rise shows planning activity beginning to edge up after retreating 2.5% in March, continuing the up-and-down pattern present so far in 2015.

April’s timid rise shows planning activity beginning to edge up after retreating 2.5% in March, continuing the up-and-down pattern present so far in 2015. Although planning statistics have essentially plateaued in early 2015, the latest month’s Momentum Index is 8.5% higher than April 2014.

The slight increase for the commercial sector was supported by three sizeable projects that entered planning – a $500 million expansion of the JW Marriott & Ritz Carlton Hotel in Los Angeles, CA; a $300 million Loews Sapphire Falls Resort in Orlando, FL; and a $100 million warehouse and office building project in Santa Fe Springs, CA.

Liquidated damages can often be defeated if it can be shown that the one being assessed these damages was not the sole cause of the delay.
Alex Barthet
February 10, 2021
Follow Us