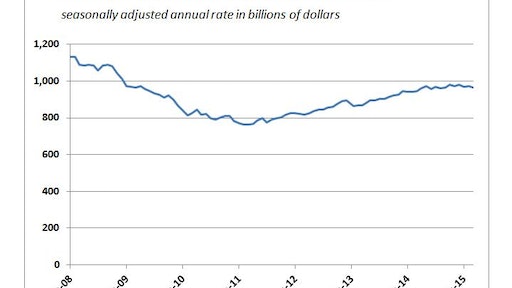 Construction spending slipped in March from upwardly revised February totals but increased modestly from a year earlier, according to analysis of U.S. Commerce Department numbers by the Associated General Contractors of America. Association officials cautioned, however, that those spending gains could be at risk if Congress and the Obama administration fail to address highway funding shortfalls that threaten to undermine the sector’s recovery.

“The first quarter as a whole was positive for all major categories of construction despite a weak March for residential and public construction spending,” said Ken Simonson, the association's chief economist. “Current indications suggest private nonresidential construction and multifamily housing will continue to grow throughout the year. But funding for infrastructure is in jeopardy, which threatens to hold down public construction.”

Construction spending in March totaled $967 billion at a seasonally adjusted annual rate, 0.6% lower than the upwardly revised February figure but 2.0% higher than in March 2014.

Spending over the first three months of 2015 exceeded the first-quarter 2014 total by 3.2%. Simonson added that weather-related anomalies in the first few months of the year, along with revisions to prior data, mean year-to-date comparisons for the full quarter are more revealing than figures for a single month.

Private residential spending edged up 0.9% from the first quarter of 2014 to the same period in 2015, while private nonresidential spending increased 6.4% and public construction spending rose 1.7%. However, these relatively mild overall increases masked large swings among some components, Simonson pointed out.

In contrast, the biggest public segments had year-to-date declines: highway and street construction, down 2.9%; and educational, down 1.1%.

Association officials cautioned that highway and street construction investments were likely to continue declining unless Congress and the administration can work out a way to pay for and pass new legislation to repair the nation’s aging roads and bridges before the program expires later this month.  They urged motorists to visit www.DriveBetterRoads.org to share stories of bad road conditions in their areas.