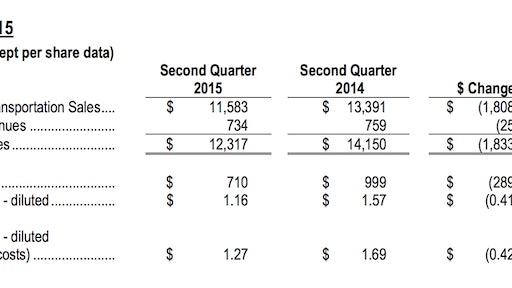 Caterpillar Inc. revenues dropped 14% in the second quarter of 2015, with declines in all industry segments. Construction-Industries revenue fell steeply in all regions except North America, where it dipped 3%.

“Our Caterpillar team continues its track record of solid operational performance in the face of difficult conditions in several of the key industries we serve. Because we serve cyclical industries, we focus intently on operational execution and cost control. This is particularly important when sales decline; our goal when sales decline is to manage costs so the decline in operating profit is less than 30% of the decline in sales and revenues. We did much better than that in the second quarter. We’ve achieved that by closely watching costs, the restructuring we’ve done over the past two years and the work done by Caterpillar employees across the world who are proving we can excel in this challenging economic environment,” said Caterpillar Chairman and Chief Executive Officer Doug Oberhelman.

“Our focus during these challenging times is on operational execution and customer success through efforts like Lean Management and our Across the Table initiative with dealers, while also investing in tomorrow through new technologies, innovation and data analytics – both within Caterpillar, and by partnering with and investing in other companies,” continued Oberhelman.

Construction sales and revenue declines were much steeper throughout Cat's other global regions: -47% in Latin America, -30% in Asia/Pacific, and -18% in Europe, Africa and the Middle East.

The economic and industry conditions that were expected at the beginning of the year are occurring. World economic growth is about as the company expected: severe weakness in mining continues, construction-related sales in China and Brazil are lower and new orders for oil-related applications declined.

The 2015 outlook for profit per share is unchanged at $4.70, or $5.00 excluding restructuring costs. The outlook for 2015 sales and revenues is about $49 billion, which is down $1 billion from the previous outlook.

“We originally set the $50 billion sales and revenues estimate in January, and our expectations haven’t changed much since then. However, currency impacts from a stronger U.S. dollar are causing sales in many countries to translate into fewer dollars than we initially expected,” said Oberhelman.

“While economic conditions in the United States are modestly positive, the global economy remains relatively stagnant. Many of the key industries we serve remain weak, and we haven’t seen sustained signs of improvement. Continuing economic weakness in China and Brazil, as well as uncertainty in the Eurozone and over Greece, haven’t helped confidence. Prices for commodities like coal, iron ore and oil are not signaling an improvement in the short term. We are committed to controlling costs as we manage through this downturn, and that will position Caterpillar for better results when conditions improve,” added Oberhelman.

“In addition to operational execution around cost, quality and safety, we have a strong balance sheet and generated $1.6 billion of ME&T operating cash flow in the second quarter. Repurchasing stock is one way we return capital to stockholders, and our healthy balance sheet and strong cash flow are helping us do that despite weakness in the cyclical industries we serve. In addition to the share repurchase, the Board raised the quarterly dividend 10% in June,” said Oberhelman.