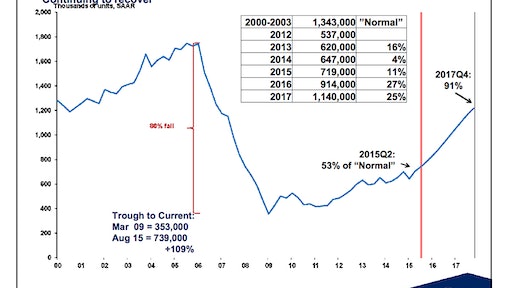 Single-family U.S. housing starts are expected to total 719,000 in 2015, and grow 27% next year to 914,000. Even if that ambitious growth projection is realized, the 2016 total would still be 47% less than the 1.34 million starts that is considered a normal level of U.S. single-family housing production.

“The nonresidential construction sector gained momentum over the last year and should continue to expand into 2016,” said ABC Chief Economist Anirban Basu. “The construction industry has benefited from increased stability stemming from low materials prices and greater certainty regarding federal budgeting and monetary policy, although a lack of appropriately skilled labor will remain a challenge for contractors. ABC predicts the nonresidential construction segment will experience 7% nominal growth in 2016.”

“Led by tremendous demand for energy-efficient spaces, spending on home improvements is on track to reach an all-time high by year’s end,” said AIA Chief Economist, Kermit Baker, Hon. AIA, PhD. “The office and retail sectors are expected to lead the commercial real estate market in 2016 with near double-digit increases in construction spending expected.”

“We expect the residential construction sector to continue its gradual recovery as we head into 2016,” said NAHB Chief Economist David Crowe. “Steady employment and economic growth, along with attractive mortgage rates and home prices will keep the sector on an upward trajectory as we go forward, however persistent headwinds including labor and lot shortages will continue to hinder a more robust recovery.”

View an archived version of the web conference.