Caterpillar Sales and Revenue Decline by 15% in 2015

Despite forecasting a further 10% decline in 2016, the company anticipates long-term benefits from restructuring actions and continuing investment in R&D and digital capabilities 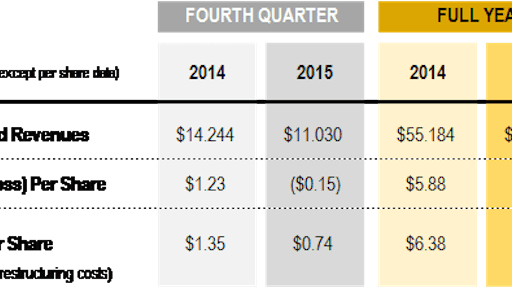 “Cost management, restructuring actions and operational execution are helping the company while sales and revenues remain under pressure from weak commodity prices and slowing economic growth in developing countries,” said Caterpillar Chairman and Chief Executive Officer Doug Oberhelman. "We took tough but necessary restructuring actions in 2015 – and they were significant. I am proud that our team stayed focused on our customers in this difficult environment. Our balance sheet is strong; our product quality remained at high levels; we gained market position for machines for the fifth year in a row; inventory levels have declined and are well positioned as we look forward to 2016; and our safety levels are world class. We are benefiting now and expect to even more in the future when markets rebound."

This past year was a difficult one for many of the industries and customers Caterpillar serves. Sales and revenues for 2015 were nearly 15% lower than 2014 and 29% off the 2012 peak. The two most significant reasons for the decline from 2014 were weakening economic growth and substantially lower commodity prices. The impact of weak economic growth was most pronounced in developing countries, such as China and Brazil. Lower oil prices had a substantial negative impact on the portion of Energy & Transportation that supports oil drilling and well servicing, where new order rates in 2015 were down close to 90% from 2014.

“We anticipated about $5 billion of the $8 billion sales and revenues decline in our January 2015 outlook as we started the year. Actual sales and revenues were about $3 billion below that $50 billion outlook because of steeper than expected declines in oil prices, a stronger U.S. dollar, weaker construction equipment sales and lower than expected mining-related sales in Resource Industries,” said Oberhelman.

The outlook for 2016 sales and revenues does not anticipate improvement in world economic growth or commodity prices. Sales and revenues are expected to be in a range of $40 to $44 billion – a mid-point of $42 billion. The mid-point of the range reflects a decline of about $3.5 billion from last October’s preliminary outlook for 2016 sales and revenues and a year-over-year decline of about 10%. The decrease from last October’s preliminary outlook is largely a result of continued declines in commodity prices and economic weakness in developing countries.

Sales in Energy & Transportation are expected to decline about 10% to 15% from 2015. Much of the decline is a result of low oil prices. During the first half of 2015, sales remained at relatively high levels for equipment used in drilling and well servicing because the division started the year with a substantial order backlog. Sales declined during the second half of 2015 as orders from the backlog were shipped and new order levels were weak. That impact, along with the further decline in oil prices, are the primary reasons for the expected decline in Energy & Transportation’s 2016 sales. In addition, continuing weakness in economic conditions in much of the world is expected to be negative for sales of power generation equipment, industrial engines, marine and rail.

Sales in Resource Industries are expected to be down about 15% to 20% from 2015 as a result of continuing reductions in mining-related commodity prices and difficult financial conditions for many mining customers around the world.

Sales in Construction Industries are expected to decline about 5% to 10% from 2015. In the United States, improving labor market conditions and relatively stable economic growth should continue to support the wider economy and construction. However, the company expects weakness in developing countries and lower activity in oil-producing regions to persist.

Positively impacting the profit outlook is substantially lower pension and other postemployment benefit (OPEB) costs. The most significant reason for lower pension and OPEB costs is from a change in accounting principle so expense reflects the effects of economic and interest changes in the year in which the gains and losses are incurred. The impact of this change is expected to have a positive impact on 2016 profit of about $425 million. In addition, Caterpillar is expecting substantial additional cost reduction in 2016, much of it from the restructuring actions taken in 2015.

The positive impacts on profit from lower costs and lower pension and OPEB expense are expected to be more than offset by the impact of lower sales and revenues.

“Our outlook reflects struggling oil and other commodity markets, and continued economic weakness in developing countries. While the U.S. and European economies are showing signs of stability, the global economy remains under pressure,” said Oberhelman. "While we manage through these difficult economic times with substantial restructuring actions to lower costs, we are also preparing for the long term. We are continuing substantial investments in R&D and our digital capabilities. These investments will be positive for Caterpillar and our customers through connected fleets and jobsites and access to data and predictive analytics.

"Investing in the future is important to improving productivity and the bottom line – for Caterpillar and our customers over the long term," he continued. "While it is tough to predict when an economic recovery will happen, the investments we are making and the actions we are taking to lower our cost structure and improve quality and our market position will help deliver better results when a recovery comes."

Due to the ongoing pandemic, AED will hold its annual event May 24-26 in Las Vegas, while offering a virtual option to accommodate member needs.
Associated Equipment Distributors
January 8, 2021
Follow Us