Nonresidential Construction Spending Inches Up in May Despite Faltering Private Sector

Public nonresidential spending increased 0.6% for the month while the private sector contracted 0.3% resulting in a total increase of 0.1% for May 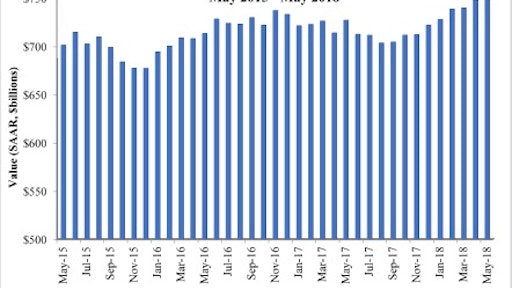 Nonresidential construction spending inched 0.1% in May and is up 3% from the same time last year.
Associated Builders and Contractors

Nonresidential construction spending inched 0.1% higher on a monthly basis in May, according to an Associated Builders and Contractors analysis of U.S. Census Bureau data. Spending, which totaled $749 billion on a seasonally adjusted annual rate for the month, is up 3% from the same time last year. 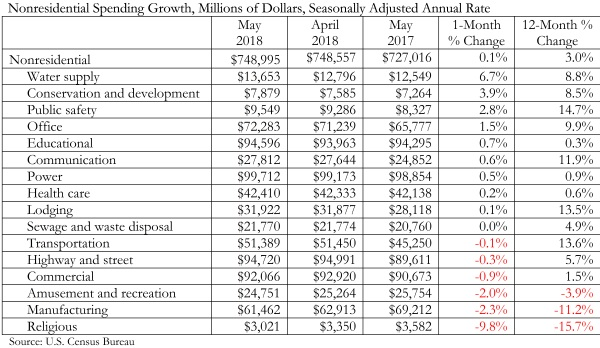 “The prediction has been that publicly financed construction spending would rise in America,” said ABC’s Chief Economist Anirban Basu. “The logic of this is rooted in two basic factors. The first is that the ongoing economic expansion, now in its tenth year, has steadily improved fiscal conditions in state and local government.  With more money to spend, more communities are empowered to deal with deferred maintenance and even to expand the capacity of certain key infrastructure, whether roads, mass transit, wastewater treatment plants or water systems.

“The other factor relates to a political cycle,” said Basu. “Increasingly, policymakers have been making the case — and much of the electorate seems convinced — that stepped-up infrastructure investment is needed. Accordingly, in recent years, 31 states have expanded their transportation funding, including 24 of them by raising state gas taxes. Not surprisingly, public construction spending is higher on month-over-month and year-over-year bases.

“What has been less clear is whether privately financed construction would continue to rise,” said Basu. “While the economy remains strong, a number of headwinds have formed, particularly concerns regarding tariffs and trade wars. Construction material prices have already begun to surge, in part because of trade disputes involving materials such as softwood lumber, steel and aluminum. This increases project costs without offering developers and their financiers any offsetting commercial benefit.

“Moreover, fears of a full-blown trade war between the United States and NAFTA partners, the European Union and/or China have likely resulted in some businesses and investors adopting a wait-and-see attitude,” said Basu. “This helps explain the recent dip in construction spending related to manufacturing. With key interest rates, like the prime rate, also on the rise, the motivation to move forward with projects may be waning. Rising borrowing costs make it less likely that a project will satisfy a given investor’s hurdle rate. Rising labor costs contribute further to this calculus.

“The upshot is that contractors would likely be primary beneficiaries of a less precarious policymaking environment,” said Basu. “Businesses, markets, developers and financiers each prefer certainty. They also prefer input costs that aren’t surging. This strongly suggests that, while private construction spending should remain sturdy during the months ahead given healthy backlog and current economic momentum, the outlook for construction spending may be rather different in a few quarters.”