A 4.6% decrease in the July Dodge Momentum Index was due to a 10.2% pullback by the institutional segment 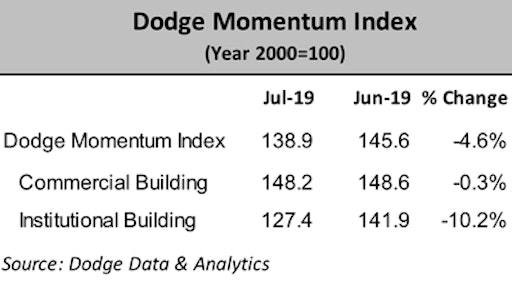 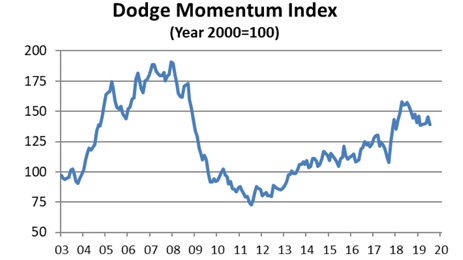 Dodge Data & AnalyticsThe Dodge Momentum Index retreated 4.6% in July to 138.9 (2000=100), down from the revised June reading of 145.6. The Momentum Index, issued by Dodge Data & Analytics, is a monthly measure of the first (or initial) report for nonresidential building projects in planning, which have been shown to lead construction spending for nonresidential buildings by a full year. The lower reading for the Momentum Index in July was due to a 10.2% pullback by its institutional segment following a 6.0% increase in June. The commercial segment in July was basically flat, slipping a slight 0.3%.

In July, there were 13 projects each with a value of $100 million or more that entered planning, made up of nine commercial projects and four institutional projects. The leading commercial projects were a $370 million warehouse and cargo facility at the Anchorage, AK, International Airport and a $290 million mall redevelopment in Raleigh, NC. The leading institutional projects were both healthcare facilities — a $230 million hospital in Albuquerque, NM, and a $200 million hospital in Pensacola, FL.