The industry added only 4,000 net new jobs for the month but has expanded by 202,000 net jobs year-over-year 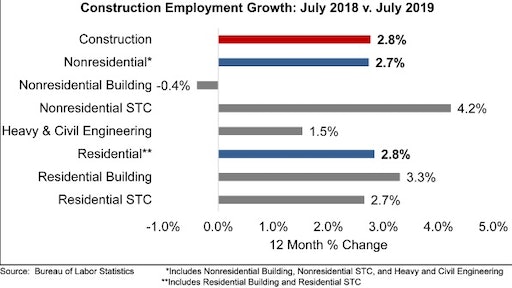 The construction industry added 4,000 net new jobs in July, according to an Associated Builders and Contractors (ABC) analysis of U.S. Bureau of Labor Statistics data. On a year-over-year basis, industry employment has expanded by 202,000 net jobs, an increase of 2.8%.

Nonresidential construction employment lost 2,800 jobs on net in July but has still expanded by 122,300 jobs over the past 12 months. The bulk of the job loss came from the heavy and civil engineering segment, which lost 4,300 jobs on a monthly basis in July. Nonresidential specialty trade contractors added 1,400 net new jobs, while nonresidential building employment remained virtually unchanged.

"It is often said that employment is a lagging indicator," said ABC Chief Economist Anirban Basu. "What that means is that the economy can continue to add jobs at a brisk pace even after it has begun to slow. Many economists will make the claim that today's employment numbers reflect the economy’s past strength and are not indicative of its current condition. Perhaps, but that doesn't change the fact that America added 164,000 jobs in July nor that more households have bolstered their spending power as a consequence. Labor force participation ticked higher, another positive sign. 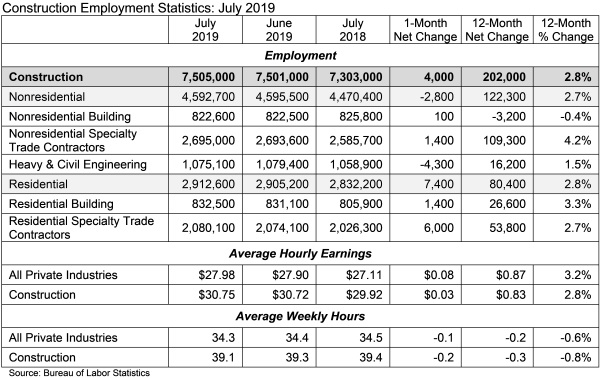 “While today's data were broadly upbeat, risks abound,” said Basu. “It's difficult to establish which risk is the most serious, but the list is long: trade disputes, Iran, corporate debt, household debt, federal debt, elevated and vulnerable asset prices, and the specter of next year's elections, which may induce many economic actors, including real estate developers, to embrace a wait-and-see posture. The election's growing imminence may itself be enough to further slow U.S. economic growth.”

Despite the small increase in total jobs, construction employment continues to show positive signs in the majority of metro areas, according to Associated General Contractors of America (AGC).

Construction employment grew in 253, or 71%, out of 358 metro areas between June 2018 and June 2019, declined in 61 and was unchanged in 44, according to an AGC analysis of federal employment data. Association officials said the employment gains would likely have been stronger if firms could find more qualified workers to hire.

“Demand for construction remains robust in most metro areas,” said Ken Simonson, the association’s chief economist. “But, with record job openings in construction and the lowest overall unemployment rate since 1969, it is likely even more metros would be adding construction workers if there were enough qualified jobseekers available.” 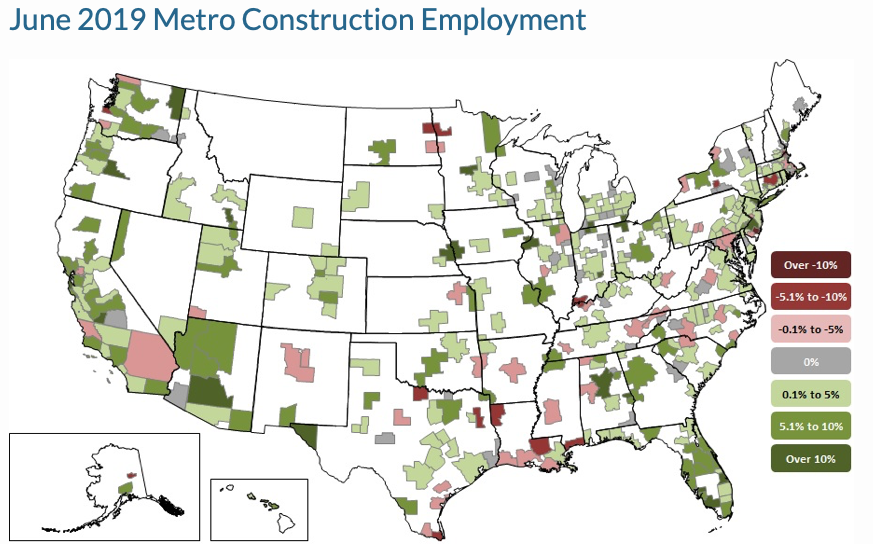 Demand for construction jobs remains robust in the majority of metro areas as employment grew in 253 of 358 metros in June 2019.Associated General Contractors of America

Association officials said that one of the biggest challenges facing many construction firms is the lack of available, qualified workers to hire. Part of the problem is that the nation’s higher education system does not place career and technical education on an equal footing with traditional college education. For example, federal Pell grants cannot be used for construction-focused training programs offered by community and technical colleges. They called on Congress and the administration to pass the bipartisan JOBS Act, which would remedy this Pell grant problem.

“It’s time to reverse the federal funding bias against career and technical education and allow students interested in vocational education to have the same opportunities available to students attending four-year colleges,” Sandherr said. “Creating a level playing field will help introduce more young adults to the many opportunities that await in the construction industry.”