In July, estimated not seasonally adjusted construction unemployment rate was at 3.8% 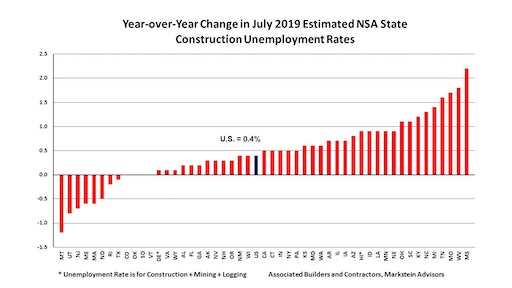 July construction unemployment rates rose nationally in 38 states, feel in 8 and was unchanged in 4 on a year-over-year basis.
Associated Builders and Contractors

In July, estimated not seasonally adjusted construction unemployment rates rose nationally and in 38 states, fell in eight states and remained unchanged in four on a year-over-year basis, according to an Associated Builders and Contractors (ABC) analysis of U.S. Bureau of Labor Statistics data. For the third consecutive month, all 50 states posted construction unemployment rates less than 10%.

The construction industry employed 201,000 more workers nationally compared to July 2018, despite a rise in the July 2019 national NSA construction unemployment rate of 0.4%, from 3.4% to 3.8%, according to BLS numbers. 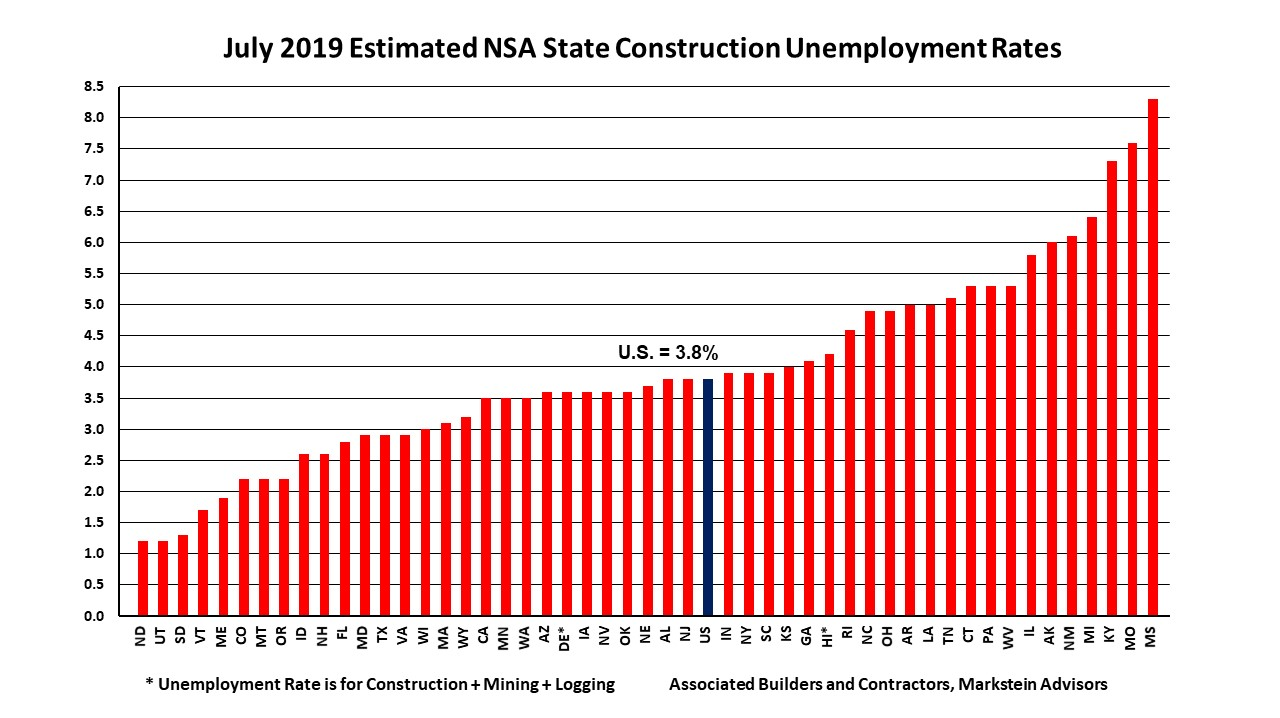 The July 2019 NSA construction unemployment rate came in at 3.8% nationally, rising from 3.4% in 2018.Associated Builders and Contractors

“In July, most of the East experienced above-average temperatures, making outdoor construction more difficult,” said Bernard M. Markstein, Ph.D., president and chief economist of Markstein Advisors, who conducted the analysis for ABC. “At the same time, major parts of the Midwest, particularly around the Mississippi and Missouri rivers, had above-average rainfall, which hampered construction. Although 12 straight months of year-over-year declines in the national construction unemployment rate ended in July, overall construction activity and employment remained healthy.”

Because these industry-specific rates are not seasonally adjusted, national and state-level unemployment rates are best evaluated on a year-over-year basis. The monthly movement of rates still provides some information, although extra care must be used when drawing conclusions from these variations.

All of these states except for Utah were in the top five in June. North Dakota and Utah tied for the lowest construction unemployment rate in July. For North Dakota, this was up from the third lowest rate in June and was the state’s lowest July rate since it fell to 0.8% in July 2015. For Utah, this was an improvement from eighth lowest in June, and was the state’s second lowest July rate on record, behind a rate of 1.1% in 2015. The state also had the second largest year-over-year rate decrease of 0.8%, behind a drop of 1.2% in Montana.

South Dakota had the third lowest rate in July, down from second lowest in June. This was the state’s second lowest July rate on record, matching last year’s July rate and behind the 2016 rate of 1.1%.

Maine had the fifth lowest rate in July, down from fourth lowest in June. It was still the state’s lowest July rate on record.

Idaho, which had the fifth lowest rate in June, fell to ninth lowest in July at 2.6%, tied with New Hampshire.

Read next: Construction Employment Slows Down in July 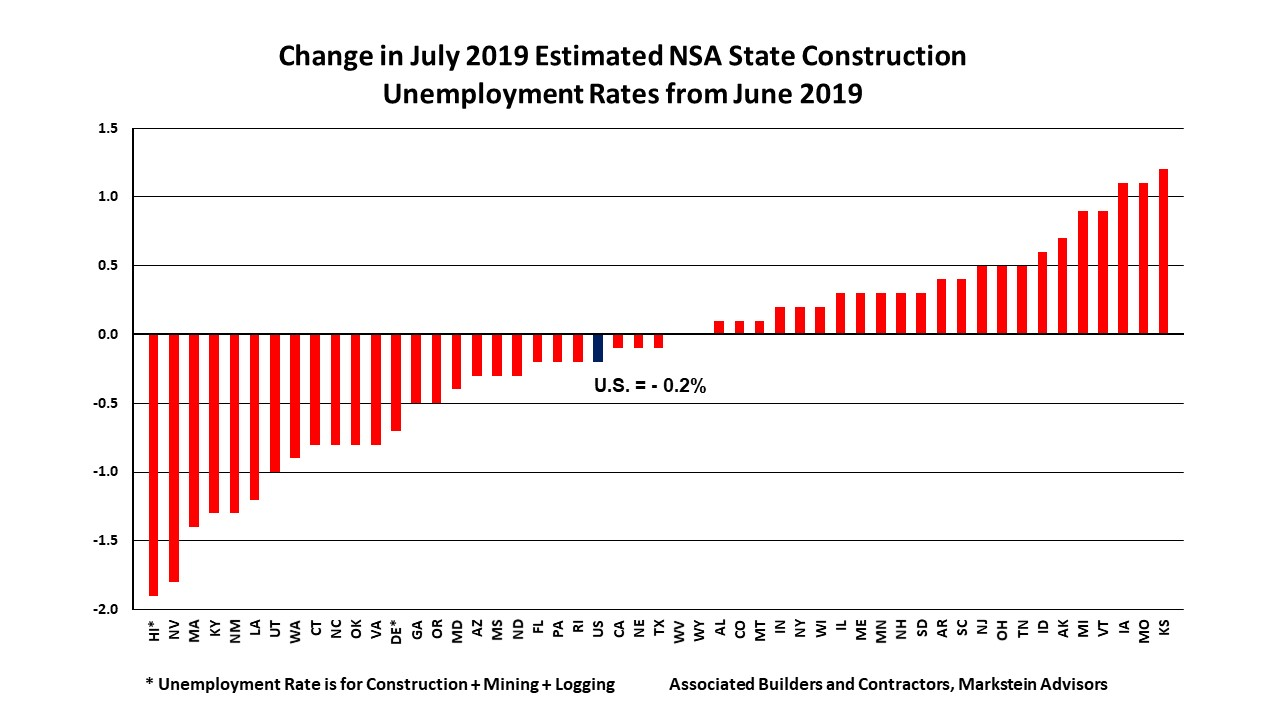 The states with the highest estimated NSA construction unemployment rates in order from lowest to highest were:

All of these states except for Michigan were also in the bottom five in June. For the third month in a row, Mississippi had the highest estimated construction unemployment rate.

Missouri had the second highest rate in July compared to fourth highest in June.

Kentucky had the third highest rate in July, an improvement from tied with Mississippi for highest in June based on revised data (originally reported as the second highest rate).

Michigan had the fourth highest rate in July compared to ninth highest in June (tied with Illinois and Pennsylvania). After a rate of 5% in 2018, this was Michigan’s lowest July rate since unemployment reached 6.2% in 2001.

New Mexico had the fifth highest rate in July, compared to third highest in June. After a rate of 5.7% last year, this was the state’s lowest July rate since reaching 5.2% in 2008.

Louisiana, which was fifth highest rate in June, improved dramatically to 12th highest in July (tied with Arkansas) with a 5% construction unemployment rate.

Connecticut, which was originally reported as tied with Louisiana for fifth highest rate in June and subsequently revised to sixth highest (tied with Hawaii), improved to eighth highest in July with a 5.3% rate (tied with Pennsylvania and West Virginia). After last year’s 4.8% rate, this was the state’s lowest July rate since the rate was 4.3% in 2001.