Construction input prices dropped 0.6% in August and are down 0.9% compared to 2018 levels 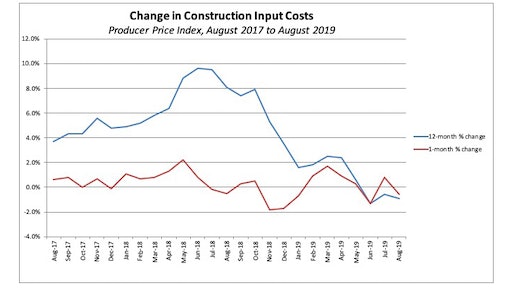 Among the seven subcategories experiencing a decline in prices during the past year, the greatest declines were in energy-related categories like: 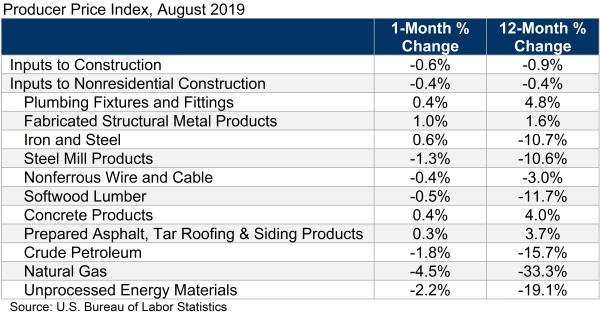 “While there are a number of conceivable explanations for the decline in materials prices — including a weakening global economy — the degree to which each factor is responsible remains unclear,” said ABC Chief Economist Anirban Basu. “The International Monetary Fund has revised its 2019 global growth outlook down four times in recent months as Latin American economies continue to stumble, and Turkey, Italy, South Africa, Germany, Russia and South Korea are flirting with or entering a recession. In addition, ongoing trade disputes continue to interrupt supply chains and delay large-scale investments in a variety of industrial facilities.

“A strong U.S. dollar is another factor that may have helped keep a lid on key import prices,” said Basu. “Another is the ongoing shale revolution, which has positioned America for leadership positions in the production of both oil and natural gas. All of these factors are associated with a surprising lack of materials price inflation at a time of significant activity in the nation’s nonresidential construction segment—a segment that remains associated with lengthy backlog and ongoing hiring.

“There are still additional potential explanations,” said Basu. “While contractors remain generally busy, construction spending growth is not expanding as rapidly as it had been earlier in the business cycle. This has been especially true with respect to private construction spending. Innovation and adaptability have also played a role as producers have quickly adjusted to shifting global trade patterns through the utilization of flexible supply chains and emerging substitute materials.