The construction industry added 14,000 net new jobs in August, and industry employment has expanded by 177,000 jobs over the last year 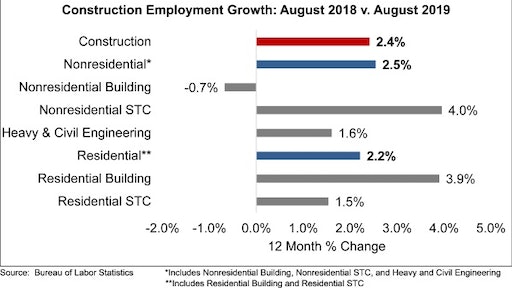 The majority of job gains emerged from nonresidential specialty trade contractors, which added 5,400 jobs in August and nearly 103,000 positions over the past year.
Associated Builders and Contractors

The construction industry added 14,000 net new jobs in August, according to an Associated Builders and Contractors (ABC) analysis of U.S. Bureau of Labor Statistics data. On a year-over-year basis, industry employment has expanded by 177,000 jobs, or 2.4%.

Nonresidential construction employment increased by 11,600 net jobs in August and is up by 114,200 net jobs over the last 12 months, translating into 2.5% growth. The majority of job gains emerged from nonresidential specialty trade contractors, which added 5,400 jobs last month and nearly 103,000 positions over the past year. Heavy and civil engineering added 4,400 net new jobs, while nonresidential building added 1,800 jobs on a monthly basis. 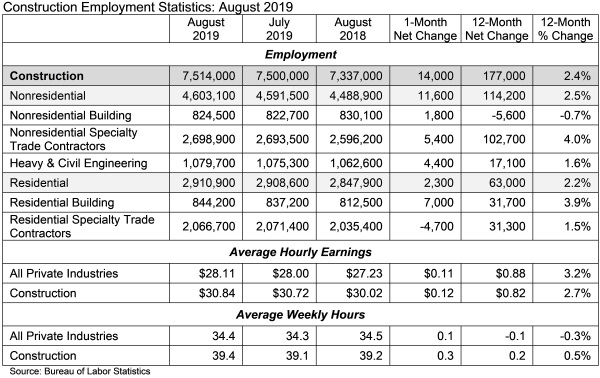 “While job growth across all industries fell short of projections, today’s employment report was just about perfect,” said ABC Chief Economist Anirban Basu. “Yes, employment growth has been softening for quite some time, with average monthly job growth totaling 150,000 during the last six months after approaching 200,000 during the prior six-month period. And employment growth estimates were also revised lower for both June and July. That said, looking beyond the headline number, August’s labor market performance was more than respectable, even accounting for about 25,000 of the jobs being added for temporary Census work.

“Average hourly earnings rose 0.4% in August and 3.2% over the past year, which was a bit better than expected” said Basu. “The labor force participation rate expanded to 63.2%, tying for its highest level since August 2013. Nonresidential construction continues to add jobs, despite difficulty securing sufficiently trained workers. And with a construction backlog of nearly nine months as of June 2019, data indicates that contractors continue to enjoy substantial demand for their services despite the nearly continuous drumbeat of dismal economic forecasts for 2020 and/or 2021. All of this is consistent with rising compensation for many Americans, which should keep the consumer-led expansion firmly in place for the balance of 2019.

“Despite some of the positive indications, the employment data are sufficiently mixed to allow the Federal Reserve to cut rates once again in the near term,” said Basu. “While that probably won’t mean much to broader U.S. economic performance, it would be welcome news for many financial market investors and could fractionally lower borrowing costs for certain economic actors, which could support ongoing momentum in the nation’s nonresidential construction segment.”