Weakening nonresidential construction spending isn't slowing down construction demand as the Backlog Indicator was up 5.4% from July 2019 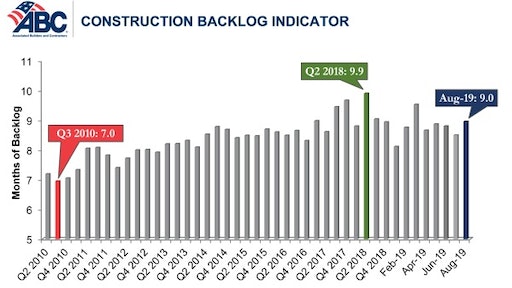 The ABC Construction Backlog Indicator has risen to 9 months after a few months of decline.
Associated Builders and Contractors

Associated Builders and Contractors (ABC) reports its Construction Backlog Indicator climbed to nine months in August 2019, up 0.5 months or 5.4% from July 2019, when CBI stood at 8.5 months.

“Despite some other leading indicators suggesting weakening in nonresidential construction spending, our most recent backlog readings show that contractors are still experiencing significant demand for construction services” said ABC Chief Economist Anirban Basu. “The primary issue for most contractors is not a lack of demand but an ongoing and worsening shortage of skilled workers available to meet contractual requirements. 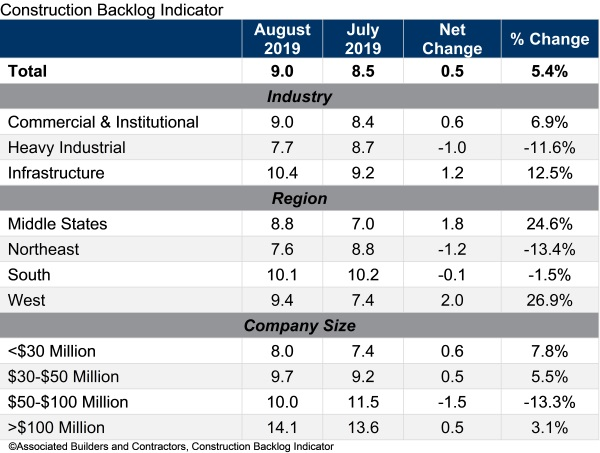 “Though this month’s report was generally positive, softening activity in the nation’s manufacturing sector is becoming more apparent in construction data,” said Basu. “Specifically, backlog in the heavy industrial category slipped to 7.7 months in August, a decline of 12%. A number of key manufacturing indicators have been weakening of late, including capacity utilization and the Institute for Supply Management’s index for manufacturing. It appears that the slowdown in factory activity is now being reflected in construction spending data.

“By contrast, backlog for those involved in heavy highway projects or other forms of infrastructure reached 10.4 months, an increase of nearly 13%,” said Basu. “The implication is that state and local governments are leveraging stronger fiscal positions and lower borrowing costs to move forward with more infrastructure projects. Not only is this a source of strength for the U.S. economy, it is helping to support overall nonresidential construction spending. Growing contractual volume in the infrastructure category helped to push backlog among Middle States contractors up to 8.8 months, a 1.8-month gain. Overall, backlog continues to be lengthiest in the South and West.”

Bonnie Mauldin, managing director of The Mauldin Group shares insights on how to market your construction business to help secure work in the current environment.
August 6, 2020
Follow Us