“The fact that backlog did not decline is significant given all the uncertainty," said ABC Chief Economist Anirban Basu. 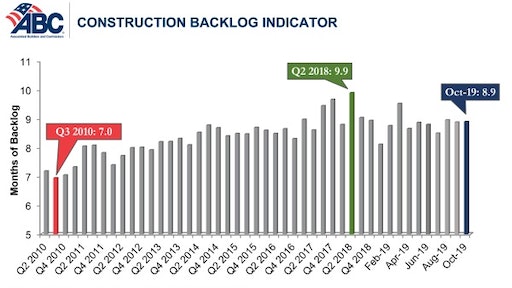 “Many would consider a flat reading on backlog as a nonevent, yet nothing could be further from the truth,” said ABC Chief Economist Anirban Basu. “The fact that backlog did not decline is significant given all the uncertainty facing various economic decision-makers in the context of a weakening global economy, political uncertainty emerging from Washington, ongoing trade disputes and increasingly volatile financial markets.

“Signs of weakness have been emerging in a variety of commercial construction categories,” said Basu. “While there are likely many factors at play, one explanation may be that the Federal Reserve raised key short-term interest rates nine times between December 2015 and December 2018 in order to contain perceived inflationary pressures. That helped raise the cost of capital, which in turn rendered it less likely that certain commercial projects would move forward. However, 2019 has been vastly different. Inflationary pressures have not emerged as anticipated, allowing the Federal Reserve to decrease rates three times in recent months. The lower cost of capital may explain why backlog in the commercial/institutional segment expanded in October.

“Backlog in the heavy industrial category declined, which is likely a reflection of a manufacturing sector that continues to be weighed down by a sturdy U.S. dollar, weakening global economy, stagnant U.S. auto sector and ongoing trade disputes. Although backlog in the infrastructure category also declined, this category tends to vary significantly from month to month. That said, October’s decline was significant, which may have something to do with the impending insolvency of the nation’s Highway Trust Fund, anticipated for 2021 absent congressional action. On the other hand, state and local government finances in America remain generally healthy in the context of the lengthiest economic expansion in U.S. history, which should help smooth out backlog in the infrastructure category going forward.” 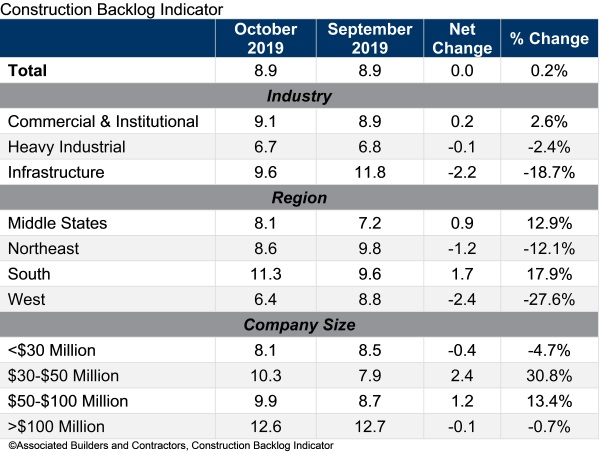