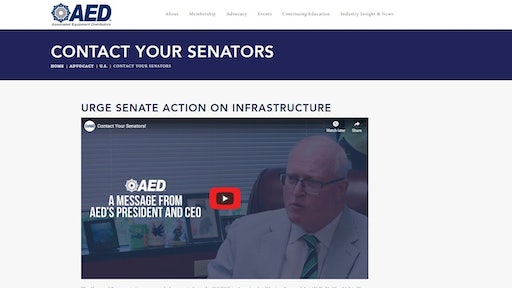 AED has launched a grassroots campaign to target U.S. Senators to act on infrastructure legislation.

Data recently released by the Small Business Administration (SBA) and the Department of Treasury detailing companies receiving Paycheck Protection Program (PPP) loans reveal the positive impact the program has had on the construction equipment industry.

More than 235 Associated Equipment Distributors (AED) distributor members received between $197 million to $462 million in loan assistance for up to eight weeks of payroll costs and other expenses, including mortgage interest, rent and utilities. According to the SBA data, the PPP supported greater than 16,000 jobs at AED distributor member companies.

AED was an early advocate for the PPP, and other government supports for small-medium-sized companies dealing with the economic uncertainty and fallout from the COVID-19 pandemic. Immediately after passage of the Coronavirus Aid, Relief and Economic Security Act (CARES Act), AED conducted free webinars for its members to advise on the PPP’s benefits and how equipment dealers could take advantage. During implementation, AED advocated for modifications and changes to the program to reflect the changing economic dynamics and challenges faced by its members.

“The data illustrates the Paycheck Protection Program's success in providing necessary assistance to AED members during these uncertain economic times,” said AED’s President & CEO Brian P. McGuire. “However, the PPP’s purpose was to temporarily maintain employment and business operations, not produce economic growth and create jobs. Without a multiyear, fully-funded surface transportation bill signed into law in the near future, the PPP’s achievements will be for naught as future construction projects are cancelled and equipment dealers make tough decisions regarding employment and business investment.”

To facilitate congressional action, AED has launched a grassroots campaign to target U.S. Senators to act on infrastructure legislation. For more information about the campaign and to take a few minutes to send a pre-written note to your Senators, click here.