Associated Builders and Contractors' member survey shows backlog jumped to 8.2 months in February on top of steady gains over the past several months. 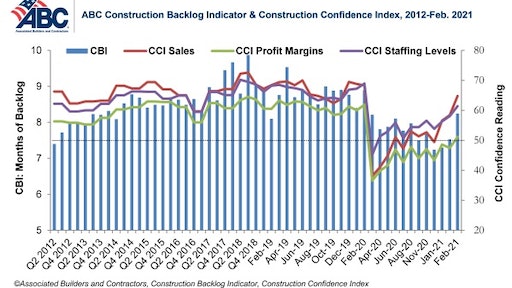 The Construction Backlog Indicator rose to 8.2 months in February, according to an Associated Builders and Contractors (ABC) member survey conducted from February 22 to March 3. This is up 0.7 months from January’s reading, though still 0.7 months lower than in February 2020.

The latest reading is part of an ongoing positive trend. “Our membership is reporting some upbeat indications suggesting that backlog rose in February to 8.2 months," Anirban Basu, ABC chief economist, reported. "That was a meaningful increase over January’s level and, moreover, we’ve been observing backlog rise for the last several months. So, the industry is getting busier and it should get busier going forward based on survey responses.” 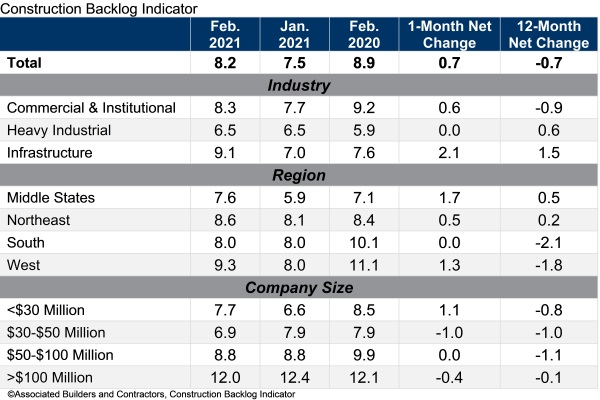 ABC’s Construction Confidence Index readings for sales, profit margins and staffing levels also increased in February, with all three indices now above the threshold of 50. While also below February 2020 levels, the readings show positive expectations for growth during the next six months. 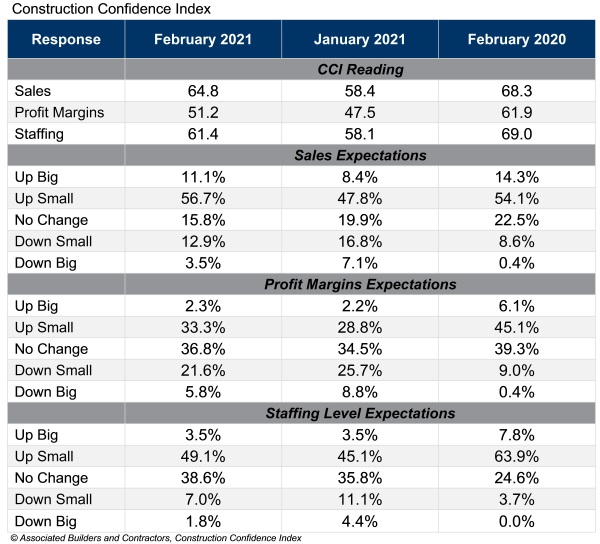 Basu attributed the gains in both backlog and contractor confidence to the fact that many projects halted during the earlier stages of the pandemic are now moving forward. There are also expectations that the economy will bounce back later this year.

“The expectation that rapid economic recovery could begin later this year has now swept through the nonresidential construction sector, which is surprising, as I anticipated this segment would be less upbeat,” said Basu. “After all, commercial real estate fundamentals have been compromised by behavioral and policy shifts motivated by the COVID-19 pandemic. Public finances have also been affected negatively, which could diminish demand for construction services going forward. Rapidly rising materials prices are also creating concern, as they would have a tendency to further squeeze industry profit margins. Despite these factors, contractors now expect sales, staffing levels and profit margins to expand over the next six months."

While the larger economic considerations remain negative, growing contractor confidence appears to correlate with the slow but steady rise in backlog. "Backlog has been edging higher for several months and rose sharply last month as projects that had been mothballed are coming back to life. Based on survey responses completed in February, projects are reinitiating more rapidly than previously anticipated, driving up both backlog and contractor sentiment," Basu pointed out. "Respondents also appear to view additional federal stimulus as another reason to be optimistic about the near term.”

Click here for historical CCI and CBI data and here for methodology. Visit abc.org/economics for the CBI and CCI reports, plus analysis of spending, employment, GDP and the Producer Price Index.

Information provided by the Associated Builders and Contractors and edited/enhanced by Becky Schultz.