Northern Concrete looked to the principles of lean manufacturing to cut waste, adopted technologies to increase efficiency, and offered its employees training and tools to boost productivity. That organization put the company on a path for growth and allows it to live up to its motto, "Solid Process. Solid Results." 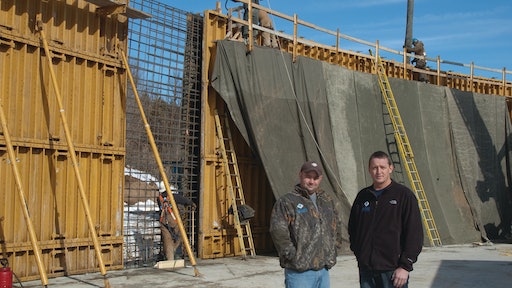 Rob Larsen and Chad Kane, proprietors of Northern Concrete of Denmark, Wis., started their business in 1996 in the residential flatwork market. Larsen's background was in concrete construction while Kane's background was with a concrete producer; neither had experience in the business of concrete. The two borrowed a skid steer from Larsen's father by day and repaid the debt by night in the currency of farm chores. "The concrete business is sort of like farming," Larsen says. "You know when work starts in the morning but you never know when you'll be done at night."

"In those days we didn't know if we were making money," Kane adds. "But we were aggressive, worked weekends and made sure our vehicles looked nice - not necessarily new, but painted, clean and running well."

Those early years spent honing their skills on their friends' and families' driveways, welding their own forming baskets to save some bucks, and building a list of clients who respected their quality service gave Northern Concrete the momentum it needed to bring the right people into the company and put systems and processes in place that would help the organization grow despite a downturn in the economy.

Northern Concrete's start in residential flatwork quickly expanded into the multi-family market. From there Larsen and Kane saw an opportunity to expand into walls when a customer pushed them to become a full-service concrete company. "Another reason we started walls was with some of the jobs we were bidding on we noticed the competition could offer a full concrete package," Larsen says.

Early days in the walls division were challenging. "We were about ready to quit walls at one point," Larsen recalls. "But we got someone on board who was a stickler for quality and liked rules. He knew how to get product in the ground right and we knew the scheduling side of the business so together it worked out."

Further diversification came for Northern Concrete when Larsen found himself on a long waiting list for a pool installation at his home. "We were already pouring decks for pools, so we learned how to pour pools with our concrete forms," Larsen says. The addition of decorative concrete around the same time gave the company the opportunity to offer a full pool package. Before taking their pool and decorative services to the public, however, Northern Concrete installed projects at their own homes and on site at the company headquarters, getting employees the training they needed for quality end results.

A big jump for Northern Concrete happened four years ago with the company's foray into commercial and industrial flooring. They had the equipment in house to do floors but were missing other elements. "We did not have the talent to do big commercial floors. It bothered me, so I sent some employees through training," Larsen says. "But we found out you can't learn to do big floors like that without actually pouring."

To prevent some of the learning curve they initially experienced on the walls side, Larsen connected with a local concrete flooring contractor experienced in industrial and superflat floors and convinced him to train a crew at Northern Concrete.

In the first year, the two companies worked together on three large flooring projects, two of which had F-Number requirements. That type of on-the-job education proved to be very valuable to Northern Concrete, even resulting in one of the projects winning a Golden Trowel Award in the "random traffic" category.

Using its skills from the commercial and industrial fields, Northern Concrete is also looking to the agricultural market for projects. The company is currently building an industrial plug flow digester, a system that turns food and animal waste into fertilizer. The project includes a 160- x 90-foot plug flow digester with 20-foot walls, an 80- x 90-foot mixing building to house gensets and green energy, and a 5.2-million-gallon water tank with 20-foot high concrete walls and a 216-foot inside diameter.

Northern Concrete rented a set of EFCO forms to complete the work. The buildings are heavily reinforced with a 7,500 psi mix that follows Department of Natural Resources specs. All said and done, the project will use 5,000 yards of concrete.

Part of the reason Northern Concrete has been successful with its diversification throughout the concrete market is the company's commitment to systems and data. The process to get the company well organized began about six years ago, at the tail end of the industry's latest boom. Larsen and Kane looked at lean manufacturing processes and adopted technologies that would help the company get organized, increase efficiencies and track every dollar. "We are a heavily data-based company. If something goes wrong on a job, we'll know why," Larsen says.

The company tracks everything, including truck inventory, fuel, concrete overages, broken and lost tools, and anything else that could cause a job to not hit its target. These numbers give the company historical data on material costs, labor and equipment so they can better estimate exactly how much a job costs and what their overhead is. "Years ago we didn't know how we were doing financially until the end of the year," Kane says. "Today we know how we are doing on a daily basis."

Having a handle on equipment numbers, job processes and estimating has paid off for the company. Kane admits that in the early days they might have bought a piece of equipment because everyone else had it. "Now we think through our equipment purchases and there's a reason behind each one," he says. One example of the company saving some money by knowing the numbers behind its equipment is with its concrete placing system. "We had two concrete conveyors, but we learned how to schedule the equipment better and now we only have one," Kane says. "We use our own conveyor on 95 percent of our walls and footings jobs and about 90 percent of our commercial flatwork projects."

When it comes to keeping employees organized and productive, Northern Concrete starts simply with an online scheduling program that is easily accessible in the employee breakroom and available through any Internet connection any time of day.

More detailed are the company's job manuals, which break down a job step-by-step. Flow charts and equipment lists make up the manuals and guide employees through every detail of a project. Foremen are expected to enforce the procedures in the manuals so every employee performs each job the same way. New employees who come into the company, no matter how much experience they might have had at another concrete company, are expected to adopt Northern Concrete's processes and follow the manuals. "We cross train our workers, so someone can switch over from flatwork one day to walls the next and not miss a beat. They all have their specialties, but they perform work in every area," Larsen says. "When you run as many crews and switch employees from job to job like we do, if you're not running each step of the project from A to B each time, people will get lost."

Northern Concrete has adopted several technologies to help them increase productivity, including total stations for job layout, a 3D system for their Somero Laser Screed and their own customization on an out-of-the-box CAD program for estimating. Larsen says there's no room for "guesstimation," and the CAD estimating system helps them stay on top of their numbers. "We build every estimate as a job, so if we estimate right, half the job is done and we're ready to build off the estimate," he explains.

At the completion of each job, Larsen and Kane perform their own QA by grading each project on a scale of 1 to 5 - and Larsen says each job needs to have a grade of 4 or 5 before he closes the books on a project. The key to offering this kind of service, he says, is striving to offer each customer the triangle of business - price, quality and service - while also communicating to the customer what they're paying for to avoid false expectations.

All the energy Larsen and Kane put into increasing efficiencies and putting systems and procedures into place paid off in helping the company expand and grow in a challenging time for businesses, all while offering customers "Solid Process. Solid Results."