Increased emphasis on efficiency and diversification have helped Van Wyks, Inc. succeed in a competitive market. 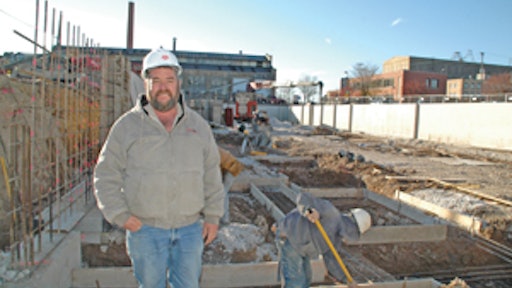 Like a lot of foundation contractors, Van Wyks, Inc. is finding the competition a little tougher lately as the residential market has slowed.

"The last few years, there's been enough business for everyone," says company president Arie Van Wyk. "Now, we're bidding against 10 other people on every job."

Van Wyk estimates that the company's residential business is down 40 percent this year, but the company as a whole will actually see an increase in revenues because of its focus on other parts of the business.

Besides an increased emphasis on commercial work, in the last few years the company has added services such as excavation, waterproofing and concrete repair.

"We want to do everything for our clients, become more of a turnkey company," Van Wyk says.

The company's size and diversity has allowed it to continue to hold the line on prices despite pressure from its residential builder clients.

"All the builders are asking us to take a pay cut," he says. "We're standing our ground, because we're booked up and things are going well."

So far, that stance hasn't cost the company, as its reputation for service and quality has kept its customers loyal. Still, pricing is the biggest concern Van Wyk has right now.

"Even holding prices steady is really a loss for us, because normally we'd be raising prices for next year," he says.

While none of his competitors in the residential market have gone out of business yet, it may only be a matter of time, he says.

"We're hearing more and more rumors about this company or that company having problems," he says.

With a large yard, a warehouse, repair garage and offices, Van Wyks has more overhead than a lot of its competitors. In an industry that is increasingly price sensitive, that means the company needs to always be looking at ways to lower its costs.

"I'm constantly on the watch for equipment and materials that will lower our costs and help us be more efficient," Van Wyk says.

In 1998, the company added waterproofing services. The company now installs waterproofing systems on all of its foundations. There wasn't a demand from the customers for the service. In fact, it was a hard sell at first because of the higher cost, but it has saved the company money by eliminating many complaints.

"I was sick of answering the phone calls from customers telling me their basement was leaking," he says. "I was actually scared to answer the phone when it was raining."

Now, his employees can be out making money doing new work instead of going back to fix old problems.

"It sure made our lives a lot better," he says. "The phone calls are a thing of the past."

Another labor saver has been the CertainTeed Form-A-Drain, which the company uses for all of its footings.

The company has also reduced its labor costs by switching to aluminum forms from B.E.P., which are lighter and therefore can be moved more quickly and easily by the crews.

"You have to get efficient or die," Van Wyk says. "We just try to stay one notch ahead."

As the builders and general contractors get bigger, price is becoming increasingly more important than relationships.

"We have been able to command a higher price than the other contractors, but the line is thinning," he says "Quality just isn't the sales tool it used to be. They all expect good, quality work, but price is what really matters."

Van Wyk is quick to say that most of the credit for his success belongs to lot of people besides himself.

To be successful, a contractor can't be afraid to learn from others in the industry, he says. Since the time he started his company in 1979, Van Wyk has been a member of the Concrete Foundation Association. This year he was selected as their Contractor of the Year. One of the biggest reasons was his willingness to share the secrets of his success with other CFA members, says CFA executive director Ed Sauter.

Van Wyk says he is merely repaying what he has received over his time in the association.

"We're just good copycats," he says. "We've learned a lot from other contractors by talking to them and visiting their companies."

The company would not be where it is today without what he's learned from other members of the CFA, Van Wyk says.

"I can't stress enough the importance of networking," he says. "I always hear guys starting out say they can't afford to go to association meetings, that they don't have the time. I don't see how they can afford not to."

Within the company, a big part of the company's success is due to a group of loyal, talented employees. The company has done pretty well at retaining its employees. Although the company is "constantly hiring" for its 100-person workforce, most of that is to fill a small number of entry-level jobs that frequently turn over, Van Wyk says.

"We try to treat them right," he says. "We pay them a competitive wage, but that's really not the most important thing. We've had other companies offer more money, but our guys have stayed."

Offering good benefits and letting employees share in the success of the company has been important. Recently, Van Wyks started using open book management with key employees, where they can see the financials, which gives them a better understanding of how the business works.

"I think in the past, they all had this idea we were making a lot of money," he says. "Now they understand everything that goes into running the company."

Finding good employees is always a challenge, but its easier now than it was a few years ago because of an increase in the Latino population in the area.

"We've gone from basically none to 30-plus working for us in the last five or six years," he says. "We'd be lost without them. That's why when I hear people talking about closing the borders, it scares the hell out of me."

There have been some communication problems caused by the language barrier, but most now speak at least some English. The company offers to send its employees to English classes so they can improve their skills and move up in the company, an offer many have taken the company up on. When the company conducts any training on safety or a new piece of equipment, Van Wyk assigns an interpreter to make sure the employees understand everything that is being said.

"They always want to please me, so sometimes they'll say they understand when they really don't," he says. "That's why it's important to have a good group of bilingual workers."

The biggest problem they've had with Spanish-speaking employees hasn't actually been language — it's been teaching them English measurements, as they are used to the metric system used in the rest of the world when they read tape measures.

The company spends a lot of time and money training all of its employees. In its headquarters building, Van Wyks has invested in a large training room. Anytime a new product, material or piece of equipment is introduced, the employees are brought in for training. Safety is also a frequent topic of training sessions.

"We are constantly training," Van Wyk says. "Employees who know what they are doing are more efficient and produce higher quality work."

Developing and educating the employees about the business has made it possible for Van Wyk and wife Sue, the company vice president, to be less involved in the day-to-day operations and prepare for the eventual succession of the company to their children and other key employees. Their daughter is the company controller and their son is manager of the excavation department. Arie used to manage the field operations and Sue ran the business side. Now, that falls to others.

"I'm the least important person in the day-to-day operations of the company," Van Wyk says. "It's not unusual now to go out on a jobsite only one or two days a week."