A crew tackles a floor installation at a busy train station. 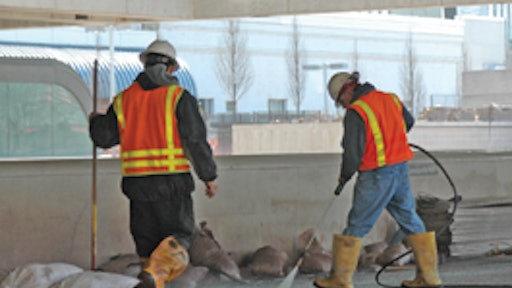 With 100,000 people coming through everyday, the Five Points plaza is one of the busiest places in Atlanta. Located in the city's bustling downtown, Five Points is the station where all of the lines of MARTA, the region's mass transit system, come together.

So Precision Concrete Construction had its work cut out when the company took on the removal and replacement of 65,000 sq. ft. of concrete floors at Five Points.

"This is probably the most difficult project we've ever done logistics-wise," says Jimmy Stimmel, the project manager.

With its importance to the city, closing the station was never an option. Instead, the work had to be done in sections, with multiple access points always remaining open.

"We've got a lot of people moving in and out of the area and getting work done while keeping them safe can be quite difficult," Stimmel says. "People are so used to going a certain way when they get off their train that they'll head toward the construction site without even thinking about it."

By using extensive sign postings and fencing off the work area, the company has managed to avoid any injuries to commuters.

The location raises other problems besides the safety factor. Because the plaza is in the middle of downtown, there is limited space to get work done.

"We're closed in all around the whole job," says job superintendent Gino Paredes. "There are only certain areas we can work in and certain times we can do things."

The biggest challenge is getting the concrete to the site. To limit the inconvenience to downtown drivers, concrete can only be brought to the site between 9 a.m. and 5 p.m. That way there are no lane closures during the morning or evening rush hours. The limited room to work also means that the concrete cannot be pumped in. Instead, the trucks have to be unloaded into power buggies, with the concrete then being transported to the job from the street.

"Everything is pretty much done by hand," says Joe McGill, general superintendent for Precision's Architectural Division. "Normally we can pour a truck out in 15 minutes. This way takes us an hour."

The surface is not ideal for pouring concrete either.

"There's not a flat spot out here," McGill says. "It's a difficult installation all the way around."

Weather also affected how the work could be done. Although originally scheduled to start last summer, project delays resulted in work not beginning until early January.

"Temperatures were still pretty cold in the morning," Paredes says. "So that meant we could only pour from about noon until 4 or 5 in the afternoon. We get anywhere from 8 yards to 54 yards a day depending on weather and temperature."

The final part of the project was the pouring of new concrete in front of several stores along Peachtree St. Those businesses needed to stay open, so the work had to be done over three weekends.

"The work can only be done on Saturday nights and Sundays," Paredes says. "It needs to be done with as little inconvenience as possible for store owners and pedestrians."

On the first weekend the existing concrete was demolished, on the second the waterproofing was installed and on the third, the new concrete was poured. During the process, temporary access was provided to the businesses so they could stay open between each stage of the project.

The project came about for both aesthetic and practical reasons. The plaza had previously been finished with precast concrete pavers with a block pattern. As the pavers had aged and worn, the appearance had become unattractive. The pavers had also shifted and moved over time, and the waterproofing system beneath them had begun to fail.

The decision was made to go with an exposed aggregate floor with integral colors to provide a more attractive look to the area. The aggregate was imported Texas granite. Two colors were used on the exposed aggregate portions: Durango Brown and French Gray, both from L.M. Scofield. In front of each set of steps, Precision poured a detectable warning strip of smooth white concrete, colored with Scofield's Ash White.

"We primarily use Scofield," Paredes says. "We have a good rapport with them and have been happy with the quality of the product."

The concrete was then finished with standard straight-edge screeds by hand.

"We couldn't use power screeds because that would push the rock down and ruin the look," McGill says.

When the concrete reached the proper texture, a 125 topcast retarder was applied. The concrete was then covered with plastic for the night. The next day it was cleaned with an acid wash and sprayed with a pressure washer to remove residue. The concrete was sealed with Diamond Clear VOX, a water-based sealer.

"Solvent-based is what we usually use, but in a high-traffic area like this we wanted the better penetration we'd get with water-based," Paredes says.

Decorative cuts were made in the finished concrete to create a system of 10-ft. by 10-ft. squares.

With a project this complex, there are only a few companies in Atlanta that could have taken on the challenge. Precision's experience with difficult jobs and the company's relationship with the general contractor and MARTA were key to getting the contract.

"We've done quite a few projects with Beatty Construction and we have a lot of experience working in MARTA stations, so that was probably the biggest factor," Stimmel says. "We have competent people that do the work — good employees who know what they're doing. That's why we're able to be successful."