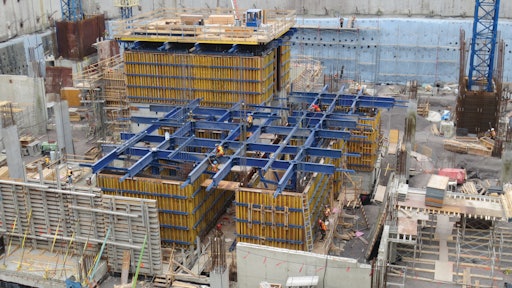 The Super Climber uses a single stroke cylinder to move the core with forms, concrete placing boom and multiple levels of working platforms up to the next casting step.

The Centre hospitalier de l’Université de Montréal (CHUM) in downtown Montreal, Quebec, is one of the two major hospital networks in Montreal. The design/construction of CHUM was entrusted to the construction health corporations of Laing O’Rourke and OHL Canada Montreal.

Concrete contractor, Coffrage Alliance Ltee, working together in partnership with Nadeau Spécialités de Construction, is facing some major challenges on this 28-floor, 411-foot building. The complex design, included a required pouring steps, two reductions in core wall thickness and the need of a formwork system with the ability to carry a Putzmeister concrete placing boom.

“On a huge project such as this, the continuous challenge is the schedule. It’s an ongoing process to keep all elements on track,” stated Frank Trimboli, sales manager, Doka Toronto. “To maintain safety at all times on restricted area of the site, Super Climber was the perfect choice,” said Trimboli. “It was chosen because of the ability to roll back the forms, carry a large concrete placing boom and other materials, as well as climb everything in one simple step.”

The Super Climber uses a single stroke cylinder to move the core with forms, concrete placing boom and multiple levels of working platforms up to the next casting step. Also, no extra work or bracing is required to handle the loads of the biggest placing booms in the market. In addition, the contractor is using Doka’s special Flex Corners along with the Super Climber system on all the cores which helps strip the formwork away from the walls in a single and quick movement.

Alliance has four tower cranes placed in four stair wells. One of the stair wells requires the SKE100 system to climb ahead of the rest of the cores. The SKE100 solution for the stair shaft was selected based on the requirements to have a self-climbing solution in this area. The problem the customer had in this area is the shaft contains a crane mast and has little to no room to work inside. SKE100 was chosen because of its flexibility which allowed the system to be mounted on the exterior of the core wall and still have the capacity to raise a gantry system. A total of six SKE 100 climbers are in use on this core.

On the CHUM project, Doka is also providing formwork design calculations and drawings, along with on-site field service. The first phase will be finished in the spring of 2016.