“Nominal” Is A Four-Letter Word

This column pertains to the use of the word “nominal” in relation to wall thickness and forming systems within the industry and the acceptance or reference to this term in the building codes. 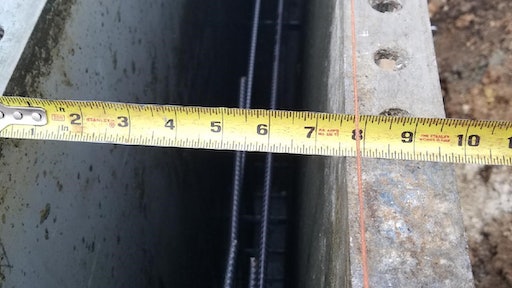 Question: We are placing a foundation wall for a residential project using our standard forming system set for 7 5/8 in. wall thickness.  The Wisconsin state code (Uniform Dwelling Code) states that a nominal wall thickness can be used for the application, however a building inspector is challenging this saying nowhere in the code does it actually define what nominal thickness is or say that a nominal concrete wall is 7-5/8 in.  The inspector is also saying that engineering behind a 7 5/8 in. wall does not hold up to the same soil pressure as for an unreinforced wall.  We've been placing these walls for a long time despite the inspector reacting as if this is new.  How can we provide evidence of this industry standard or the correct interpretation of the terminology?

Answer: Surprisingly, this conversation is not as uncommon as it may seem. Codes are not often transparent, consistent and complete in the tabulated or prescriptive references that contractors, builders and engineers are presented with for construction.  Historically this is in part due to the consolidation of three separate model codes into the current International Residential Code that resulted in a foundational loss for the base equations and data supporting the code, which is then adopted by state jurisdictions. However, the issue itself is one that is relatively easy to support based on the current general codes and the more detailed reference codes. In order to clarify the concern moving forward in the acceptance of the proposed solution, a look at the current building codes is important.

The Wisconsin Uniform Dwelling Code (UDC)1 is a typical state adoption of the International Residential Code (IRC)2, which as this column has discussed in the past, is the reference most utilized by designers, contractors and code authorities throughout the U.S. While variances in the effective IRC edition and possible modifications applied to that base code exist from state to state, it is rare that the specifics related to prescriptive foundation wall criteria are ever affected. Specific to the UDC in Wisconsin, section SPS 32.01 Loads and Materials, item 3(d) references ACI 3323, the residential concrete code providing a greater level of detail for concrete foundations than general building codes take the space to deliver. This code is also a frequent reference this column uses as substantiation in many of these discussions.  ACI 332-16 states:

8.2.1.2 Foundation walls designed by 8.2.1.1 shall satisfy the following conditions:

Further in the code the prescriptive tables are defined with the reference to minimum thickness as:

Since its first date of publication, the prescriptive minimum wall thickness has been prescribed in terms of an actual minimum thickness as compared to the general building code (IRC) providing for a nominal thickness due to the confusion in the market.  The tables present the prescriptive requirements based on applied equivalent soil pressure, wall height and height of backfill for both “plain” structural concrete walls as well as the minimum required horizontal spacing of structural reinforcement when it is required. The relationship of the actual minimum wall thickness presented in ACI 332 sets the acceptance criteria for applications ranging from 7.5 in. to a full 8 in. wall thickness based on the forming system being used without modifying the performance values. This is in step with both the IRC and in this case, the UDC for Wisconsin. The IRC states:

Turning to the referenced table for R608.3, sub note (d) provides the reference to the terminology of “nominal” as:

Nominal wall thickness. The actual as-built thickness of a flat wall shall not be more than 1/2 inch less or more than 1/4 inch more than the nominal dimension indicated.

While it is curious to note a maximum tolerance for the actual versus nominal wall thickness, in terms of the structural integrity of a foundation wall and the reference by section R404, only the relationship to minimum is required. In the Wisconsin UDC, section SPS 321.18 Foundations states:

Paragraph (b) in this code gives reference to a 6-in. nominal wall thickness being permissible at any location where the unbalanced backfill does not exceed 12 inches.  Table 321.18-B below shows the simplification of wall design offered by this UDC.

This table is overly-simplified to the consolidated soil conditions in Wisconsin and also designates that no reinforcement is necessary or considered.  No minimum reinforcement, horizontal or vertical is established in the UDC. Looking to the 2015 IRC, the user can find an increased amount of prescriptive information based on the use of tables R404.1.2(1) thru (8) for a variety of conditions. An excerpt of Table R404.1.2(8) combines several of these tables (2) thru (4) and as shown here.

Easy reference to where no vertical steel is necessary and where it is required can be seen on this summary table. The minimum concrete strength for this prescriptive table is 2,500 psi as compared to 3,000 psi for the Wisconsin UDC. A good recommendation is to also reference back to the prescriptive wall tables of ACI 332 where a total of ten tables with concrete strengths ranging from 2,500 to 4,500 psi are presented for steel reinforcement tensile strengths of both 40 and 60 ksi.

An understanding of these documents and respective sections can establish a more credible relationship between inspector and contractor/builder moving forward as well as removing this from being an impinging argument for future schedules. When a construction code has been simplified to the extent that the Wisconsin UDC has, it is important to know as much as possible of the greater industry references so that a broader base can supplement interpretations.

Ed. Note:  CFA Executive Director, James Baty, FACI, participates in many discussions of construction and code application for Association members, designers and code authorities. Contact him at 866-232-9255 or by email at jbaty@cfawalls.org. ACI documents can be obtained by contacting the CFA or by visiting the American Concrete Institute (www.concrete.org) and ordering from their bookstore.