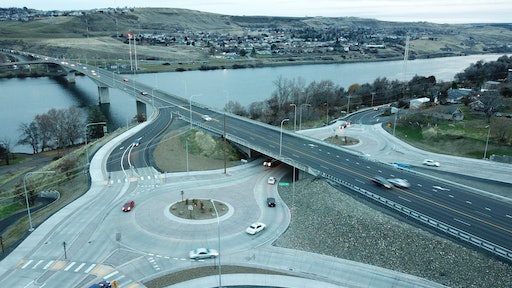 The new roundabout project joins SR 129 with Fleshman Way, which motorists use to travel east across the Snake River from Clarkson, WA, to Lewiston, ID.
Knox Concrete

Just mention the Fleshman Way/State Route 129 roundabout project to Knox Concrete’s Travis Knox, and he’ll immediately describe all the interesting aspects of what was a major Asotin County Public Works’ project for his skilled crew.

Knox Concrete has built a strong reputation in the Lewiston, Idaho/Clarkson, Wash. market for residential and commercial work. Travis and Jaimie Knox, owners of Knox Concrete, are passionate about providing clients with superior quality. Along with their team, they pride themselves in finding creative solutions for their clients. They constantly research the latest advances and design trends in concrete. Their services span everything concrete, including countertops, foundations, patios, extruded curbing, stamping and coloring to name a few of their specialties.

The roundabout, however, was a unique project in several ways. First, it was a large project compared to Knox’s normal day-to-day projects. Secondly, it was one being built for road agencies, county and state, with all the construction, budget and deadline requirements generally attached to those projects.

A large portion of the project for Knox involved installing 400-yards of extruded curbing using a Power Curber 5700-B the contractor has had in his fleet for three years.

“We’ve used it on subdivision projects where we’ve constructed rolled curb, along with curb and gutter, but on this project, we used it to install seven different curb styles,” Knox notes.

For example, on all the paved ramps leading to and from the roundabouts, Knox installed edge curbing after new asphalt paving was completed by Poe Asphalt of Clarkston. Holes were drilled, and dowels installed into the new pavement to keep the concrete curbing in place.

“On this project we had to install rebar in all the rolled curbing placed in the roundabouts to support heavy truck traffic that often cuts across the roundabout (elevated island) when making the turn,” Knox explains. “That’s not common to what we normally have to do when installing curb in residential areas.”

Acme Concrete Paving of Spokane, Wash. Installed 4,820 square yards of concrete required to construct the travel lanes leading to and from the roundabouts. The contractor also installed and stamped the 1,183 square yards of pigmented concrete required to construct the 10-in. thick elevated roundabout islands. Those islands are designed and designated as truck aprons required to accommodate trailer trucks maneuvering through the interchanges. The specifications called for a BASF Rheo Federal Brown integral color for all pigmented concrete used on stamped portions of the project.

“We used a Bunyan Industries’ roller screed to strike off the concrete before beginning the stamping process,” states Robert Seghetti, president of Acme. “We rented the stamping mats (Proline Arizona Flagstone design) from Knox to maintain the same pattern being used throughout the project.”

Within six to eight hours after stamping the roundabout island, Acme began saw cutting the concrete to control any cracking once the concrete fully cured.

A project engineer specified where to make the cuts on the roundabout portions of the project and provided a layout with GPS coordinates needed to position string or chalk lines to guide the saw operator.

The final step in the stamping process included applying a Proline Walnut enhancing color to highlight the joints of the stone pattern, followed by a sealer application to block color fading and enhance the overall look of the surface.

While Knox’s portion of the stamping process represented less concrete than that used for sidewalk and curb construction, it required 60 days to complete, compared to the 30 days required to place 400 yards of curbing and 350 yards of sidewalk.

“It’s the first time we constructed a municipal stamping project and one of challenges was the fact that the state doesn’t allow concrete placement and curing when the temperature is over 80 degrees,” Knox says. “So, with the project being constructed during the summer months, we had to hit it hard when the temperature allowed to keep it on schedule.”

Knox Concrete had 20 crew members on the project throughout the summer and when Asotin County officials commented in the local newspaper article in late August that the project would open in September on schedule and under budget, the Knox Concrete team felt pretty good about how they executed their portion of the attractive, better-functioning and much safer Fleshman Way U.S. State Route 129 interchange.