Staying Warm on the Jobsite

Keeping warm in all kinds of weather and jobs. 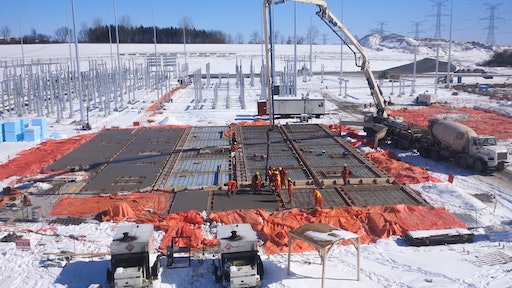 Staying warm in the winter on a construction jobsite can be challenging. In addition to the temperature, workers must dress for wind chill and wet conditions in the form of humidity, ice and snow.
Tilt-Wall Ontario

In the past construction sites often closed down during the winter months, especially those that required concrete placement throughout the winter. But winter doesn’t stop construction now; concrete can be placed in almost any cold weather condition thanks to the development of chemical admixtures and better technology to keep slabs warm during their curing cycle. The decision about whether to work in the cold now is more related to worker safety and reduced productivity. Temperature isn’t the only weather factor that contractors must take into account, wind (wind-chill), humidity, ice, water and mud, and snow are also factors.

Based in Chicago, Illinois, McHugh Construction is perhaps the largest builder of super-tall buildings (defined by the Council on Tall Buildings in Urban Habitats as buildings taller than 984 feet in height) in the US. They are currently building the 1186 foot tall 93 floor Vista Tower complex near Lake Michigan in downtown Chicago. The structural concrete construction gets cold, moist winds off the lake which can challenge the work force in their attempt to stay warm. But Maxim Levin, McHugh’s concrete project manager for this construction says high-rise construction is the company’s “bread-and-butter” work and their crews are experienced in dressing for this type of work.

The decision to work on a given day for McHugh depends on a lot of factors. Kevin Morley, McHugh’s Project Concrete Superintendent for the Vista Tower project says they consider their schedule, the level of risk involved, and what the tasks are for the day. For instance, if they are casting a floor they need a forecast of 10ºF and rising temperatures in order for concrete to gain strength fast enough for post-tension reinforcing to be stressed the following day. Temperature requirements for vertical walls and columns aren’t as critical.

Levin says that wind is an important factor too. In the winter wind speeds of 10 mph or more can cancel work. Their workers are involved in these decisions too. Morley says most of their workers have been with them a long time and their judgment is trusted by the company.

Snow is also an issue. When snowfall from the preceding night can’t be removed by crews within the first two work hours of the next day, the job is shut down. This typically happens when amounts exceed 4 inches. The biggest challenge occurs when snow falls while concrete is being placed.

If the crew thinks weather is too rough to be safe, McHugh will shut the job down.

The amount of clothing workers wear to stay warm is somewhat dependent on each person’s body; some are naturally warmer than others. But most workers put on as many as 6 layers of clothing—staying warm and being able to move around freely is the issue. Workers whose job requires constant movement need less clothing to stay warm than those who have to stand in one position. For example, the operator who controls the concrete placing boom dresses more warmly than those in the puddle placing concrete because they don’t move very much. Sedentary workers are beginning to experiment with battery heated clothing.

When a floor is cast McHugh encloses the floor below with tarps and uses construction heaters to warm the area and the fresh concrete above. Workers can go to this space to warm up if their hands and feet get cold. Morley says they often eat their lunch there too. But he notes that their crew prefers to work on the floor above where they are exposed to the weather.

McHugh is on a “three day cycle” at the Vista Tower site—one floor every three days is their schedule. But Levin says they typically lose 10 to 15 days of work due to inclement weather in the winter time.

Len Overbeek, the owner of Tilt-Wall Ontario, Ontario, Canada, says they have been in business for fifteen years and are accustomed to working under winter conditions. “If we don’t want to work in the winter we are losing much of our work season,” he says. His company is a tilt-up sub-contractor; they only construct tilt-up panels. He adds that his company has worked on a dozen tilt-up award winning projects and seven of them were built over the winter months.

The Ontario area, as well as most of the Midwestern US, recently endured a six week period where temperatures didn’t reach 32ºF and Overbeek says they worked for much of that time. The coldest temperature they have placed concrete so far is 5ºF (-15º C) and like McHugh, their crews make the ultimate decision about whether to work or not. “If a worker says their hands or feet feel frozen they go home early that day. If a crew feels cold and they decide to stop work for the day, we go along with that too.”

When Overbeek sells a job he tries to convince the owner to include floor radiant heating for their building. If they agree he uses it to heat the slab they are casting panels on. If the owner doesn’t want to do that Overbeek’s company constructs a temporary casting slab and installs ground heating coils to heat the slab. These casting slabs can be 10,000 to 15,000 square feet in size and are demolished at the end of the job. The heated casting bed accelerates concrete strength development so the panels can be lifted into position more quickly but the casting bed also keeps workers warm as they work. A bigger problem is wind and snow on the jobsite.

In terms of clothing Overbeek says their crews typically dress with layers of clothing starting with thermal underwear, pants, and warm shirts. They wear insulated coveralls and insulated boots.

Winter construction can add as much as 10 percent to the cost of a typical winter project but Tilt-Wall Ontario’s costs, including the construction of casting slabs and ground heaters are in the six to seven percent range—enough to give them an edge. Overbeek typically loses less than a dozen days of work to winter weather.

Jason Ells, Sr Vice President, Sales and Business for Custom Concrete in Westfield, Indiana, says his company started in 1969 as a poured wall foundation company. They currently have 230 employees and build foundations for both residential and commercial buildings. They also construct floors for warehouses and “big box” facilities and their work goes through all four seasons.

Ells says they didn’t work in a two week cold spell when temperatures hovered around 0º F in the Midwest states; they typically shut down when temps drop to single digits because they think work becomes too risky. He says their typical work day temp during the winter months is in the mid 20º F range and workers have little trouble staying warm. He adds that when workers constantly work outdoors through the seasons they have little trouble acclimating to each season. “It’s the person who suddenly starts working in cold temperatures that has the most trouble.”

Keeping workers warm and safe in the winter is a responsibility Custom Concrete shares with their workers. Ells says they recently conducted a crew training session to help recognize the early signs of hypothermia and know what to do if one of their teammates is showing the symptoms. Custom Concrete also maintains a company store where their workers can buy good warm clothing.

Here is what Custom Concrete does about working in cold weather:

Their advice for cold weather clothing is the following:

Ells doesn’t think employees use battery heated clothing but he says they sometimes use chemically activated hand warmers in their gloves.

Actively moving all the time causes bodies to generate heat and keep warm. But electrically heated clothing can help, especially for those with more sedentary jobs. Motorcycle riders use this technology when they ride in cold weather. They buy jackets, pants, socks, and gloves that plug into their motorcycle’s battery to keep comfortably warm while riding. On construction sites the advent of lithium batteries, which store large amounts of energy compared to their size and weight, can heat jackets for several hours without recharging. The same battery that powers a drill/driver can be used to power electrically heated jackets. Companies such as Milwaukee Tool, Milwaukee, Wisconsin and Bosch Power Tools located in Mount Prospect, Illinois are leaders in this technology. Both 12 and 18 volt battery platforms are being used to heat the jackets. The key elements for both products include carbon fiber heating elements, a thermostat with three temperature positions; high, medium, and low, and a battery which is kept in an out-of-the-way pocket. They have heating elements in the chest and back to warm the core. The jackets include an outer wind breaking shell and high-loft insulation to prevent heat from escaping. Also, they can be easily cleaned in a washing machine after removing the battery and battery holder.

Battery heated jackets make it possible to dress with fewer layers of clothing, resulting in freer movement. They are designed to fit a little more snugly so that the heating elements remain closer to the body.