Lightweight and versatile, molded polystyrene foam is a commercial building material that despite being commonly used remains somewhat misunderstood. 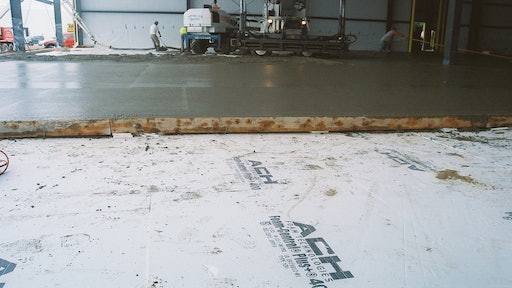 Lightweight and versatile, molded polystyrene foam is a commercial building material that despite being commonly used remains somewhat misunderstood. Frequently identified by the misnomer Styrofoam, molded polystyrene products range from lightweight structural materials and insulations used in commercial construction to packaging for medicines, electronics, and other delicate payloads to OEM applications like the hull of a jet ski, or insulation fill in RVs, and so much more.

Molded polystyrene has incredible compressive strength, making it well suited as a lightweight structural fill. At Snowbird Ski & Summer Resort in Utah when a new 23,000-SF guest center was built at 14,000 feet on top of Hidden Peak, molded polystyrene geofoam helped stabilize a 45-year-old mountainside tram. Designers didn’t want any loading from settling soils to be added to the tram’s foundation wall as the result of the new building. Designers developed a structural barrier that will never erode by filling the void between the guest center’s foundation and the tram wall with Foam-Control Geofoam.

Like compressive strength, molded polystyrene’s thermal insulation capacities are also quite exceptional. Used as insulation, molded polystyrene rigid foam is ideal almost anywhere a high-performance building envelop is desired. At Badger State Fruit Processing, a Wisconsin Cranberry processor, Foam-Control PLUS+ molded polystyrene insulation was selected based on a combination of performance, environmental impact, and cost. Badger State’s insulation objectives were a full building envelop solution - walls, roof, foundation perimeter, and underslab - making it a six-sided challenge. The underslab insulation was Foam-Control PLUS+ 400. With a compressive strength of 40 psi, the stackable insulation can support the weight of the plant’s massive freezers without risk of structural collapse.

Atlas Molded Products manufactures Foam-Control Geofoam and Foam-Control PLUS+ across a wide range of compressive strengths that begin at 15 pounds per square inch (psi) and scale up to 60 psi. Through structural loading is never an issue for molded polystyrene, occasionally, proving it can be. Recently a company building a large food processing facility had some questions about using Foam-Control PLUS+ insulation beneath the cold storage slabs that Mullikin had never been asked before.

The engineer's reply by email read in part:

I was forwarded your technical brochures regarding the properties of Foam-Control PLUS+ insulation. I wanted to verify if you had technical information regarding the insulation foundation modulus (equivalent modulus of subgrade reaction) for your product. We are expecting very high point loads on the slab for this project, so I’d like to have that information available for verification and future reference.

“This was a first for me,” says Mullikin. “The term modulus of subgrade reaction wasn't something I was familiar with.”

Fortunately for Mullikin, a reliable resource was at the ready in Todd Bergstrom, Ph.D., of AFM Corporation. Bergstrom has spent the last 22 years applying his Doctorate in material science and engineering from Northwestern University to researching, developing, and testing molded polystyrene against variables of every sort. From conducting water absorption testing, and quantifying structural performance to proving R-values, Bergstrom has invested his career of molded polystyrene.

“Modulus of subgrade reaction refers to the relative stiffness of the layers of support beneath a concrete slab,” says Bergstrom.

Bergstrom shares that some of the confusion surrounding molded polystyrene is that it can be used as both an insulation as in the case of Badger State Fruit Processing and a structural fill called geofoam as in the Snowbird guest center. Though the materials are identical, there are two separate designations within ASTM International standards, ASTM C578 for insulation and ASTM D6817 for geofoam.

Rigid cellular polystyrene has been used as a roof and in-wall insulation in commercial construction for more than 50 years. It was first tested and published in ASTM standards under ASTM C578 “Standard Specification for Rigid, Cellular Polystyrene Thermal Insulation.” Rigid cellular polystyrene products include both extruded polystyrene and molded polystyrene materials whose practical purposes in commercial construction have grown well beyond the original thermal insulation objectives to now prominently include structural support.

“Until 2002, all rigid cellular polystyrene fell under C578 when ASTM D6817 was introduced specifically to account for structural applications using geofoam,” says Bergstrom. “Many architects still think of these products exclusively as insulations and problematically, the original structural capacities listed in the insulation standard for XPS materials are inadequate without adjustment factors. Structural loading should always be specified using the structural capacities in ASTM D6817.”

“C578 is meant to compare two types of materials against one another,” summarizes Bergstrom. “D6817, however, defines the loading capacity the material can support indefinitely when used structurally.”

While both Foam-Control Plus+ molded polystyrene and extruded polystyrene materials can support the intended structural load at the Midwestern cold storage facility, Foam-Control PLUS+ is much more efficient to build with. Insulations made from XPS are manufactured in flat, rigid sheets just a few inches thick and must be stacked to achieve depth. Foam-Control Plus+ is molded in blocks as large as 8’ x 4’ x 36”-thick. Despite their size, these large blocks are easily moved by hand and builders can quickly and easily install large structural fill sections in tight places with only manual labor. Hot wire cutters are used to easy to customize blocks to fit around pipes, columns, or other obstacles.

“Twenty-plus years of working with clients on insulations and structural solutions and they never run out of questions,” says Mullikin. “Atlas Molded Products wants to make sure owners, engineers, architects, and contractors understand the incredible capacity, resiliency, and versatility of molded polystyrene foam and we’ll do it one project at a time.”