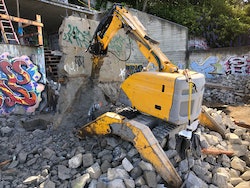 With the Brokk machine Jamba Construction demolished 1,200 cubic yards of concrete and lava, completing 60% of the overall demolition.
Brokk

With sweeping views of San Francisco Bay and the iconic Golden Gate Bridge, the Lava House has a history with as many twists and turns as the tunnels, passageways and rotting stairs that remained after a landslide halted its construction in 1982.

Jerry Ganz, a Midwestern entrepreneur who found fame as the original mass marketer of automobile seat belts, bought four adjoining waterfront lots with terrific views of the Bay Area on the exclusive Belvedere Island. When the city refused permit requests for Ganz’s original 30,000-sq.-ft. mansion, construction began on a smaller 16,000-sq.-ft. home. Ganz imported more than a 1,000 cu. yds. of lava rock from Hawaii to create intricate gardens and design features. The material inspired the structure’s unique name. After 10 years of steady construction, however, severe flooding and site instability caused Ganz to abandon the project.

Ganz remained involved with the property for several decades before stepping back and leaving the ruins of the Lava House to a trust overseen by family members and associates. Deterioration of the concrete and lava structures and limited site access for emergency responders led to increased concerns for public safety in recent years. So in 2018, the property’s trustees decided to work with Belvedere officials to remove the crumbling structure.

Demolishing the structures and stabilizing the landslide-prone cliff face would require a creative contractor. Steep terrain and a narrow site ruled out the use of large excavators. Handheld equipment was an option, but a time-consuming, dangerous and expensive one.

Jamba Construction, a company with a reputation for tackling unique and complicated projects, was tasked with finding a safe, efficient solution.

Up for the Challenge

Jamba Construction arrived to begin demolition in early 2019. The local company has 14 years of experience in high-end home construction. Over the years, it built a solid reputation for problem solving, working on some of the most unique and challenging buildings in the area — including the Garay House in 2010, which earned the firm a Grand Award and Builder’s Choice Award. With the unique challenges presented by the Lava House project, Jamba’s team looked forward to the opportunity to work with new equipment and techniques.

“We gravitate toward projects that require us to be innovative and to try new things,” says Mark Swanson, owner and president of Jamba Construction. “Over the years, that has resulted in a team of creative problem solvers and a whole host of service offerings I never would have expected. Small-scale demolition has been part of the initial phase of several projects, but the Lava House presented us with something we’d never done before — a complex, large-scale demolition on inhospitable terrain with practically no access. It required a brand-new approach.” Working in tandem with a 25-ton tow truck parked on the road, Jamba maneuvered the Brokk machine down the hillside.BrokkJamba’s first challenge was finding equipment that had the power to demolish reinforced concrete and lava but was small enough to maneuver on the site’s steep terrain.

“Access to the site was our biggest hurdle,” Swanson says. “The property makes for an amazing view, but a bit of a logistical nightmare when you need to arrange for equipment. We had two choices — by land or by sea — and neither one of them would be easy. Everything was just too steep to bring in any type of heavy equipment.”

Removing an estimated 1,000 cu. yds. of debris was the easy part. Jamba contracted a landing craft to deliver a track loader with a grapple attachment and a 10-wheel dump truck to the beach area of the site. Materials and debris were then removed over the water and across San Francisco Bay.

The actual demolition would be bit more difficult, however. The landing craft was not large enough for the cranes or bigger excavators Jamba needed. Even if the company could land larger equipment, there was no way to traverse the steep terrain and gain access to the demolition site. The narrow waterfront and difficult currents would make it nearly impossible to moor a barge or platform, as well.

Getting equipment to the site from land presented Jamba with another set of challenges that limited its equipment choices. Due to landslides and deterioration, there was no driveway or clear path to access the site preventing the contractor from simply driving in equipment. A narrow, two-lane road running across the top of the four lots created almost 400 linear feet of road access, but a low rock wall fronted the property along most of that length. In addition, a 60° incline just off the shoulder restricted access for larger equipment. In the end, Jamba could only identify one 8-ft. section with the access and tie-off points necessary to safely lower equipment 150 ft. to the jobsite below. Everything else, including personal vehicles, had to be parked at the top of the cliff.

Doing the whole job using handheld pneumatic devices was also rejected by Swanson and his team. With more than 2,000 yds. of material to be demolished, Jamba estimated it would take an additional three months and $150,000 to complete the job with hand tools alone. There was also the human cost to consider. Jamba couldn’t discount the risk to its workers that the difficult site conditions and long hours with handheld breakers could cause. Tasked with demolishing the Belvedere Lava House, Jamba Construction opted to use a Brokk 160 remote-controlled demolition machine, which provided the hitting power needed in a smaller footprint.Brokk“We knew there had to be a solution out there,” says Swanson. “We were looking at mini-excavators in late 2018 when we came across Brokk on the World of Concrete website. It was perfect — almost too good to be true.”

Swanson was happy to find the Brokk 160 remote-controlled demolition machine could provide as much hitting power as a 4.5-ton excavator but only weighed 1.76 tons. The demolition robot’s compact design was perfect for tackling the Lava House’s narrow passages and complex architecture. Jamba partnered with a third party to operate a single Brokk 160 at the Lava House jobsite — the first phase of the 10-month project.

Demolition of the Lava House had been relatively under the radar of the Belvedere community until February 2019 when Jamba closed off one of the island’s major roads to lower the demolition robot to the jobsite.

Working in tandem with a 25-ton tow truck parked on the road, it took about two hours to maneuver the machine down the hillside. The remote-controlled demolition machine was attached to the truck’s powerful winch to keep it from tumbling down the steep incline. Standing safely on the road, the Brokk operator used the remote control to clear the machine’s path as it descended.

Working in tandem with a 25-ton tow truck parked on the road, Jamba maneuvered the Brokk machine down the hillside.Brokk“The maneuverability of the Brokk machine really made the descent easier,” Swanson says. “The articulation in the arm allowed the operator to put the breaker tip down and stabilize the machine if it was getting a little off balance on the slope. He was also able to break up any obstacles like roots, stumps or rocks that could cause it to tip. As we watched it move down the hill, we realized even if we had found a mini-excavator with enough power, the Brokk gave us more flexibility.”

With the path cleared, Jamba was able to lower additional equipment down to the jobsite, including a Kubota SVL-75 high-flow compact track loader with MB-L140 crusher bucket and a 9,000-lb. Kubota KX040 mini-excavator with demolition hammer.

While Jamba’s crew worked to clear paths and backfill areas of the landslide-prone site to stabilize it, the Brokk operator hammered away at the main structures. The machine was able to produce 600-ft.-lbs. of hitting power at up to 1,400 bpm using a SB202 breaker. The operator started demolition on the roof of the garage and steadily worked his way down, creating paths out of debris for the robot to maneuver to the next demolition area.

“For the most part, we let the Brokk machine handle the buildings while crews used mini-excavators and handheld pneumatic tools to clear away smaller debris,” says Swanson. “It worked out perfectly — it kept the crew and equipment away from the more dangerous demolition areas and we were able to get more done while the Brokk operator handled the heavy hitting.” Demolition of the Lava House started on the roof of the garage and the Brokk 160 was used to steadily work down.BrokkIn a month, the demolition robot demolished 1,200 cu. yds. of concrete and lava, completing 60% of the overall demolition. Using the Kubota track loader and MB-L140 crusher bucket, Jamba crushed 1,000 cu. yds. of concrete and lava for backfill to stabilize the site. An additional 1,000 cu. yds. — along with 200 cu. yds. of steel, wood and other materials — were removed by barge and trucks to recycling facilities in the Bay Area.

With the completion of phase one, the Brokk 160 was demobilized from the site and winched back up the slope. While they waited for cooler fall temperatures to start the landscaping phase of the project, Jamba completed demolition and debris removal with supplementary equipment.

In less than a year, Jamba Construction demolished over 1,500 cu. yds. of concrete, lava, steel, wood and debris. In true California fashion, most of it was recycled.

“This project presented us with some exciting challenges,” Swanson says. “It also gave us a chance try out new technologies. We’re looking forward to more opportunities like this one.”