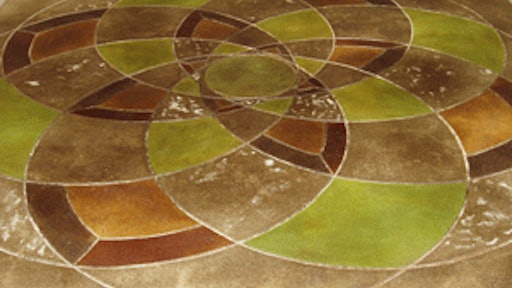 The texture you can achieve by acid staining a sweat finish concrete surface.

Recently a contractor/friend contacted me about a pour he was involved with. His question was that several days after the pour, he seemed to be getting a white chalky substance coming to the surface, which is usually an indicator of efflorescence. After questioning him on this pour, we found out that it was an exceptionally cold day in which the concrete ready-mix supplier dosed the mix with over 2 percent of calcium chloride accelerating admixture and in addition used 15 percent fly ash in the mix. This recipe can spell disaster if the intent is to come back at a later date and apply acid stain, which unfortunately was the case here on this project.

We found out that this was in fact calcium deposits leaching to the surface, which can be removed. The problem is that calcium chloride typically makes the surface of the concrete very splotchy, which in many cases does not go away after staining. Many contractors do not pay particular attention to the concrete mix design. After the concrete is placed -- after it is too late -- they find out that the concrete is not reactive; thus the stain is not taking, or the concrete has splotchy imperfections in it. Often it is hard to predict how the stain is going to take to the concrete. That is why I always emphasize the importance of casting a sample mock-up off to the side of the actual pour using the same mix design and the same finishing sequence as the actual slab that has been placed. This way there are no hidden secrets, and as an installer you know specifically what to expect.

If you are in the business of actually placing and finishing concrete knowing that at a later date you will be staining, generally speaking the more cement in the mix the stronger reaction you will get from the chemical stains. Fly ash and granulated blast slag, sometimes referred to as pozzolans, can have very positive effects on concrete by improving the finishing ability, reducing permeability and reducing the chance for efflorescence. But they can also lesson the reaction between the chemical stain and the concrete surface because removing a percentage of cement reduces the amount of calcium hydroxide. Metallic salts in chemical stains react with calcium hydroxide in hardened concrete to produce color.

Creating texture for stain variance
Textural differences dramatically influence how a chemical stain will ultimately look. Any time there is a change in texture, whether it is a painted wall or in our case a stained concrete floor, there can be a visual difference in color depending on the amount of textural difference. The optimum finish most stain professionals prefer is a hard-troweled surface because of the way the stain takes to it, producing a very marbleized look. You can also over trowel the surface, especially with ride-on trowel machines, creating a burnished appearance making the surface so dense that nothing will penetrate, let alone a chemical stain.

On a surface such as this, or any surface for that matter, it is always important to conduct a water test for absorbency. Using a spray bottle, simply mist the substrate with water and check to see if the water is absorbing into the concrete and darkening the substrate. If the water beads up and does not readily absorb into the concrete surface, the installer may need to open up the slab. I usually like to start with the least aggressive method -- a black stripping pad on the bottom of a swing buffer and a little bit of water. I will test and make a determination if I need to utilize a more aggressive method, which could include a sanding screen, a sanding disc, or in an extreme case, dustless grinding.

A few other textures I regularly work with knowing that the surface will receive an acid stain at a later date are: rock salt finishes, seamless texture skin surfaces, and a sweat or fuzz finish, as it's known to the "old time finishers."

We used the rock salt technique on a regular basis down in the Disney Theme Parks. It included broadcasting a light or medium rock salt over the surface about the time that you would consider stamping it (depending on the texture) and then covering over that with a thin mil plastic, typically 1 mil. We would purposely not have the plastic lay flat, but with creases and folds in it. We would then tap the rock salt into the fresh paste with our pool trowels and then literally trowel the thin plastic into the surface of the concrete. The plastic acted as a lubricant for our trowels, while at the same time producing an interesting texture. We immediately removed the plastic and then cleaned either the next day or several days later; by then the rock salt dissolves. A word of caution -- rock salt is probably not the best finish in freeze thaw environments because moisture can get trapped in the low lying areas, freeze and promote pop-outs. However, the plastic finish is a wonderful non-skid surface that produces a leathery-like look after the staining process.

The seamless texture surface is a wonderful candidate for acid staining because the stain concentrates in the low lying areas of the texture, producing a very natural look that mimics natural stone. Experiment with the appropriate texture in the given area (i.e., interior residential floors vs. sloped driveways).

One of my favorite textures for staining happens to be the rotary sweat finish. This is simply taking a pool trowel at the last phase of troweling and in a circular pattern, rubbing the trowel flat as opposed to cocking the trowel as if you were final troweling. This is a wonderful nonslip surface especially for exterior applications, and the stain looks beautiful on this finish.

The bottom line is if you are the contractor who is actually installing the concrete with the intentions of staining later, it is your responsibility to understand the mix that you are pouring as well as the influence, or the texture, you are putting on the surface when you come back and stain. I encourage you to experiment with these different textures.

Bob Harris is the founder and president of the Decorative Concrete Institute, Temple, Ga., which provides hands-on training in architectural concrete. He has personally placed or supervised the placement of more than 3 million square feet of decorative concrete and is the author of a best-selling series of decorative concrete books and DVDs. For more information, call 877-DCI-8080 or visit decorativeconcreteinstitute.com.