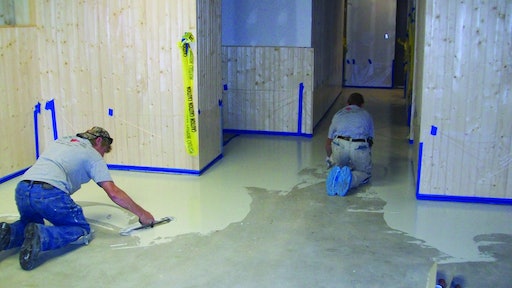 "We were lucky because we were able to have full control of the space without other contractors working in the area at the same time," Dawkins says. Prior to installing the floor, Dawkins created representative samples in shop to get the client's approval. "As part of the sampling phase, we put down several competitive skim coats of which our client chose Terra Fresco by Bob Harris," he adds.

When Dawkins and his crew got to the job, the carpet had been removed but mastic still remained on the concrete slab. The crew used planetary grinders to remove the mastic and prep the floor. Dawkins used Ardex Feather Finish to patch holes in the slab and to fill the expansion joints. "If you leave the expansion joint open, the microtopping will want to run into the joint," Dawkins says. So they fill the joints and then use tape to mark on the walls where the joints are.

The next morning the crew used 1/4-inch paint rollers to evenly apply one coat of the Terra Fresco by Bob Harris priming system, which helps seal the concrete slab surface and improves the microtopping's adhesion, Dawkins says. That afternoon the crew trowel-applied the Terra Fresco microtopping, which was allowed to cure for the rest of the day. "This microtopping enables us to cover the patches without needing multiple coats," Dawkins says. "It also enables us to get in and out of the job a lot quicker."

The next day the crew returned and used a Saw-Tec Crack Back walk-behind saw to reopen the expansion joints. It was then screened with a 100-grit screen and vacuumed. "We use the screening across the floor to remove imperfections and create a smooth finish," Dawkins says.

It was then time to color the floor. The client wanted an old leather looking floor so Dawkins choose two brown water-based dyes for the job. Dawkins and crew spray-applied Decorative Concrete Institutes' water-based dye in Graham Cracker. One crew member followed the application with a microfiber mop working the dye into the floor. The crew applied two coats of the dye over the entire floor. After drying, they came back to highlight the floor with a dye in Tree Bark. Using the same spray and mop process, Dawkins applied the second color sporadically across the floor for a mottled look. "We didn't want to darken the floor, we just wanted to give it some highlights," he said.

Using 3/8-inch-nap paint roller, the floor was covered with one even coat of 100 percent solids epoxy. The crew would roll the epoxy onto the floor and then pull the roller back perpendicular to the first roll in order to make sure the floor would get an even coat of epoxy, Dawkins says. The floor was screened again with a 100-grit screen to remove any bubbles in the epoxy coating. After vacuuming, the crew used 1/4-inch nap rollers to apply one coat of urethane before grouting the expansion joints. "Grouting was done for sanitary reasons so no food could fall into the void and get stuck. It also helps prevent chipping around the joint," Dawkins says.

The combination of the quick drying Terra Fresco microtopping and water-based dyes allowed Dawkins to get a textured, acid stained look without the time constraints of traditional microtoppings and the odors of solvent-based dyes.