A table and bench set test the limits of decorative concrete. 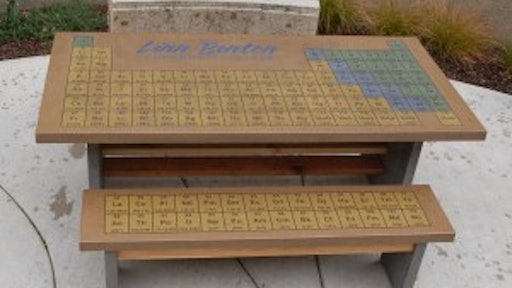 When approached by a physics professor from the Linn-Benton Community College about making a Periodic Table of Elements inspired table and bench set, concrete contractor Preben Petersen of San Jose, Calif. was ready to give it a shot despite the intricacies the project posed. "It was a challenge because I hadn't done anything like this before," Petersen says.

After completing a course at the Concrete Countertop Institute several years ago, Petersen's interest in decorative concrete was sparked. Petersen offers a variety of decorative concrete services such as indoor and outdoor furniture, commercial furniture and fixtures, kitchen counters and BBQs. The majority of Petersen's work is custom. "I am looking to do creative things that push and challenge my boundaries," he says. "I like to make unique pieces."

Unlike his past projects, Petersen had to complete a few other steps before beginning the concrete work. With several versions of the Periodic Table, Petersen coordinated with physics professors at the college to ensure the most accurate data was represented in the finished product.

Working with professors wasn't the only new aspect of this particular project. He made rubber molds using rubber from Smooth-On, something he had never done before. Petersen created the rubber molds to change the detailed CNC routed table pattern into a negative that he could cast against. This system left the letters, numbers and lines raised in the rubber, resulting in a void in the concrete.

Petersen had several concerns about pouring the table top. "I looked at the preparation many times. I would walk away and think this was insane because of the number of colors, the number of materials and the fact that CAS (calcium sulphoaluminate) cement sets up fast. I was afraid I wouldn't be able to complete it in a timely manner." He chose CSA cement because it is greener and has a faster set time. Petersen uses his own GFRC (glass fiber reinforced concrete) CSA mix in order to maintain consistency.

Once Petersen finalized the approach, he began the process by measuring out the more than 50 ingredients for various colors used for face coats and backer batches including black, blue, green, white and yellow. The colors were from Concrete Counter Supply by Fishstone as were many of the other ingredients. "They all needed to be ready to be added at the right time," Petersen says. "I don't have a large mixer so it was all mixed with hand-held mixers in smaller batches as needed.

Petersen removed it from the mold the next day, and then grouted the letters and lines in black. After waiting two days, he wet-ground the top until it was flat and filled in any pin holes with slurry, grinding it again to obtain a smooth top. Petersen let the top dry for a few days before sealing.

The casting of the table and benches took him about a week to complete.

Bob Harris talks with two men who split their time between decorative concrete and the Us Army.
Bob Harris
August 28, 2009
Follow Us