Topping It Off with a Decorative Concrete Overlay

Contractor uses stamped overlay to get the right look. 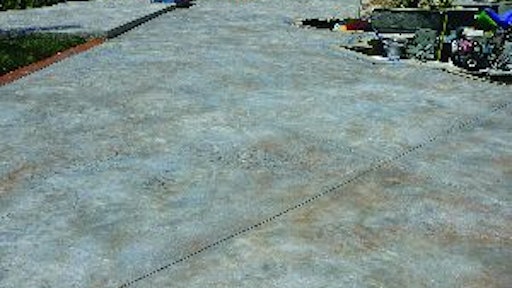 This overlay served as a cost-effective solution to an extensive cracking problem on the existing concrete.

Concrete will crack. Oftentimes, applying a concrete overlay can be a more cost effective solution than ripping out and replacing the entire cracked concrete slab. Stuart Nickel, owner of Absolute Best Concrete Coatings, recently completed an overlay project at the San Manuel Indian Reservation in Highland, Calif., where he used a decorative overlay to hide a cracking issue.

The residential job consisted of applying an overlay to the pool deck, back and front yard patios and walkways, and the driveway. The project took six weeks and consisted of a total of 15,000 square feet of overlay. “The biggest challenge was the excessive cracks in the existing concrete,” Nickel says. “We had to do a lot of crack repair and add expansion joints to help relieve the concrete from cracking again.”

Nickel became the second contractor to take on the job after the first overlay — while still in progress — was deemed unsatisfactory. As a result, Nickel had to scarify about 1,000 square feet of concrete and start the job over.

“Prep work prior to installation of any overlay job, if not done correctly, is the main reason for overlay failure,” he says.

To prep this job, the crews ground out and opened all the cracks. Then they placed an epoxy crack repair gel about ½ inch deep into the cracks. Nickel used a walk-behind concrete saw to cut additional expansion joints into the concrete.

The concrete surface was pressure washed prior to applying the overlay. “I don’t acid etch because the acid continues to etch the concrete even if you neutralize it,” he says.

After cleaning, he rolled on a Westcoat epoxy primer and broadcast 30 grit silica sand over the epoxy. “If you don’t use epoxy primer with sand broadcasted, the stamp mix can eventually delaminate or lift from the concrete,” Nickel says. He allowed the primer to dry for about four hours before applying the overlay.

The project required 600 50-pound bags of Westcoat Specialty Concrete Systems’ TC-6 Stamp-It overlay which was mixed with water using a drill and mixing paddle. “We used two guys to mix the overlay because we were mixing four buckets at a time, and each time a bucket was mixed it was emptied onto the surface,” Nickel says.

The mix was poured onto the concrete, and then Nickel used a gauge rake to smooth out the overlay at ¼ inch and followed it with smooth troweling.

After letting the overlay sit the appropriate amount of time, it was time to stamp. “Usually, you can start stamping when you put your hand on the overlay and it doesn’t stick to your hand,” he says.

For stamping, Nickel sprayed the overlay with a Westcoat stamp release and then used Proline stamps in an old granite texture.

Nickel used a 4-inch grinder with a diamond v-blade to grind out all of the expansion joints that had been covered by the overlay. To minimize high impressions, he used a brick rubbing technique: using a sanding brick to remove high spots, smooth edges and detail the texture.

The stamp release was washed off with soap and water, and the surface was left to dry. To complete the job, Nickel stained the stamped overlay with Super-Krete’s Series 9500 water-based stain and then sealed it with Westcoat Polyurethane 7500 sealer, into which he broadcast aluminum oxide.