Coping with the Unexpected

Despite problems with Mother Nature, Hausz Concrete finishes the job. 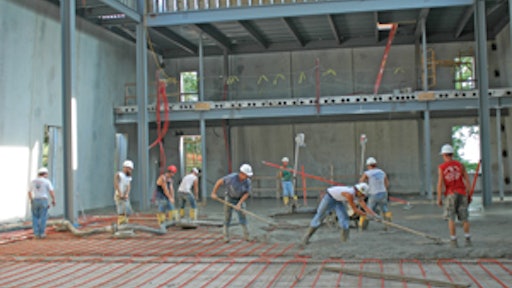 When Hausz Concrete Inc. started work in July 2006 on a Buddhist temple in Oregon, Wis., Paul Hausz, president, expected it to be a normal flatwork and decorative concrete job his company could complete in about three months. Instead, nature and subcontractor delays required Hausz to use a creative approach to recover from the unexpected problems.

The three-story, 27,000-sq.-ft. temple is made of concrete and steel. It has tilt-up concrete walls with Spancrete and poured toppings on top of that and some natural limestone on the outside. The owners wanted a building with a natural look to fit into the hilly, wooded site. Hausz Concrete was hired to install all the concrete flatwork and stamped concrete and to acid stain all the flatwork.

A known challenge from the beginning of the job was the restricted access to the site. Because of the sloping terrain and the trees, construction vehicles could not drive in. As a result, all the concrete had to be pumped and the concrete for the decorative steps had to be hauled by hand in 5-gal. pails.

Hausz Concrete began its work by pouring the floors for the third floor mezzanines. Even though the forecast was checked and no rain had been predicted for the day, water came down from the sky after 95 percent of the floor had been placed. "It was dripping through the ceiling and we had to put plastic down to keep the drips from penetrating the surface of the finished slab," Hausz says.

On the day selected for the second pour, Hausz carefully checked the weather forecast again and the skies were supposed to be clear and rain-free. This work involved placing 11,000 sq. ft. of concrete to create the second-floor slab. This time, Hausz took the extra precaution of having a large tent built over the structure to protect it from any possible adverse weather conditions.

"That was the day that Madison, Wis., had 4 ft. of standing water downtown from the rain," he recalls. "At the jobsite, we had 4 in. of rain in about an hour. Seventy-five percent of the floor had been finished and 25 percent of the surface was washed off." The wind ripped the huge tent superstructure that had been installed completely off the building, so it did nothing to protect the pour.

To save the damaged floor, Hausz called for help. "I've got an old trick up my sleeve that I was taught by my former boss at Keonig Concrete Corporation," he says. "He brought one of his riding finish machines the next day with three of his guys, and we broomed all the water off the surface of the concrete. We reagitated the surface and we broadcast 1,000 lbs. of dry Portland cement on top of the existing slab. We used the riding machine and burned that stuff back in and got the other stuff to bond. Now you can't even tell where this water problem happened." Hausz estimates using this procedure to salvage the floor saved about $30,000 compared to the cost of removing and repouring it.

Even though it rained again when the lower level was poured, this time the damage was minor. "The rain put us probably about three weeks behind schedule," Hausz says. "There was a big gap between pouring each floor because it kept raining." It rained at least twice a week for three straight months at the jobsite during the time Hausz Concrete was trying to do its work.

The delays in pouring the floor slabs meant the waterproofing contractor who was supposed to seal the Spancrete on the upper level landing slab that was to get decorative stamping had to be rescheduled. Once this company's workers were on-site, it took them three days to seal the slab. But the waterproofing was inadequate. It kept leaking and had to be redone seven times, with each reapplication taking three days. The waterproofers kept patching the leaking section of the floor instead of redoing the whole slab as Hausz requested. Since they were under the supervision of the general contractor, he did not have the authority to direct their activities or to hire another waterproofing contractor. This delay in getting the slab sealed put his company another month behind schedule.

Because of the necessary work sequence on the job, Hausz could not work on other aspects of the temple while waiting for the rain to stop or for the waterproofers to finish their work. He was forced to find some unrelated jobs to fill the time and supplement his company's revenue. Other subcontractors, including stone masons and steel workers, could not do their parts of the temple job while waiting for the slabs to be poured. The plumbers and electricians were able to do some work but were also put behind schedule.

Even though a Hausz Concrete superintendent kept the other subcontractors and the general contractor informed about the schedule delays, it was still a difficult situation. "It was tough to keep telling everybody it will be three more days before the slab will be done," Hausz says.

Fortunately for Hausz, no penalties were assessed because of the way the contract had been written. "The contract was pretty lenient," says Hausz. "There were no deadlines for my work. The original contract with the owner had a finish date, but it recognized you can't control acts of God."

By Nov. 28, Hausz Concrete had completed 75 percent of its work on the job. What remained to be done involved sealing the decorative concrete, and doing the acid staining and final finishing of the flatwork. Hausz estimated that, barring further problems, his company would be done with its part of the temple job by the end of 2006.

Another challenge in placing the slabs was the temple's use of in-floor heating. "We had to be very, very careful while pumping and pouring a 3-in. finished floor over in-floor tubing," Hausz notes. "We needed to be sure not to cut any lines." Because of the special heating system, no saw cut joints were used. "We elected to let the concrete crack naturally because we were acid staining the finish and trying to create a natural look like real stones," he points out. "We were trying to make something unique and cool. Each acid stained floor has its own look. I can never replicate the same floor in another location."

A Copperhead laser screed was used to screed the slabs. "We were pouring on top of Spancrete," Hausz says. "The only way to hold a flat elevation for striking the concrete off was to do it with a laser."

When it was time for finishing with the Whiteman 3-ft. riding power trowel, special composite finishing blades were used.

"They are plastic composite which allows us to finish the concrete smooth, but not burn the surface, to allow for easy acid staining," Hausz explains.

Because these blades are expensive and can only be used once before they wear out, he would only recommend them for jobs that need this type of special treatment. For the final finishes, he is using sealers from Polymer Science Corporation, as he has found they go farther and are more durable.

Decorative concrete work is Hausz Concrete's specialty and that is a large part of the reason why the company was hired for this job. In addition to acid staining the floors, they also built what Hausz describes as "a phenomenal set of steps." The 38 steps are 9 ft. wide and were stamped to look like natural stone.

Dealing with the force of nature and with uncooperative workers who are not under your control are things that can happen to concrete contractors on any construction job. Finding successful ways to work around these problems are the marks of a construction professional.

Other concrete contractors who find themselves in similar situations might take some guidance from Hausz's experience on this job. "You have to keep your head up and keep a positive attitude," he suggests. "You have to keep thinking and pulling things out of your hat to make this stuff work. You have to be ingenious and creative and come up with things, take the risk, try them and make it happen. It's concrete and it's probably one of the hardest trades out there."

Since the unexpected can happen any time, even when the most careful preparations have been made, concrete contractors need to be mentally prepared to cope with it and be ready to adapt to whatever circumstances they encounter.

Building construction and operation creates 38% of global carbon emissions, and as investment in green building accelerates post-pandemic, change in materials and methods are on a path to become common in less than 10 years
Larry Stewart
March 2, 2021
Latest
Coatings & Sealants