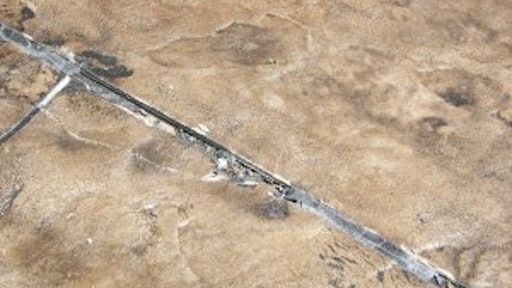 "Overlays are not designed to repair cracks," says Tim Lowe of Increte Systems. But if a crack is left unrepaired it will result in problems, including causing the overlay to crack and fail itself.

Crack must always be cleaned prior to repair. Lowe suggests filling cracks with an epoxy and then broadcasting silica sand over the epoxy to provide a profiled surface for the overlay to adhere to.

Existing control and expansion joints and saw cuts can't be ignored either. "If control joints are completely overlaid there is great potential the slab will continue to move and that movement will create a crack in the overlay," Lowe says. "The overlay will then rub up against itself and that will lead to spalling and delamination."

Lowe notes that joints need to be honored where the original joints are placed. If a contractor cuts new joints into the overlay but covers the old joints the concrete will still move in those spots resulting in the problems mentioned above.

Contractors have a few options when choosing how to deal with existing joints and saw cuts. A contractor can overlay the entire surface and then recut the overlay joints directly above the existing slab joints. This isn't always the best option if the joints are wider, Lowe says.

Another option is to use a moistened mason string. Lowe says to place it in the saw cut or joint prior to applying the overlay. Before the overlay is cured, lift the string out of the joint, exposing where the joint needs to be cut. Come back the next day and finish cleaning and cutting the overlay joints.

A third option is use the joints as starting and stopping points. Lowe says contractors can mask off the jobsite along the joints or saw cuts, preventing the contractor from overlaying over the joints. This also means the contractor will not have to spend the time cutting out the new joints.