For the Wallis Annenberg Center for the Performing Arts, located in Beverly Hills, California, architects were challenged to restore the historic 1933 Beverly Hills Post Office and a new 500 seat theater. 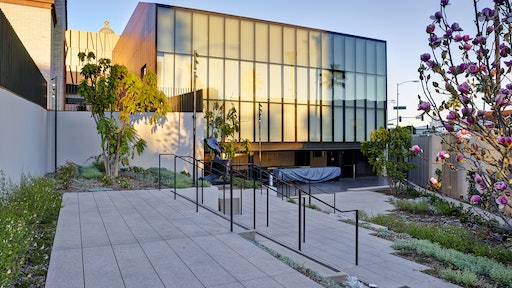 For the Wallis Annenberg Center for the Performing Arts, located in Beverly Hills, California, architects were challenged to restore the historic 1933 Beverly Hills Post Office and a new 500 seat theater. The Post Office also includes an additional 150 seat theater. The new, modern building was designed to reflect the activity of what happened on the site so many years ago. The sides of the building display what appears to be open and partially opened letter envelopes, a nod to the historical nature of the site.

“The building was so extravagant. There was this beautiful post office building and the striking new building. We worked primarily with the landscape architects, Lutsko Associates to achieve something subtle which would create a nice canvas for the building,” says Lance Boyer, president of Trademark Concrete Systems, Inc. and Chairman of ACI 601D (Decorative Concrete Certification).

The project called for 940 lineal feet of cast-in-place concrete walls ranging in height from four feet to 14 feet; 34,000 square feet of EcoCast finish pedestrian and vehicular paving and 1,100 lineal feet of cast-in-place steps. The pedestrian and vehicular paving as well as the steps featured Beverly Hills Beige integral color seeded with Feldspar, a reflective aggregate.

While the vast majority of the walls were straight, some curved walls reached heights of 14 feet. The walls were built using site-built plywood forms and finished with a smooth texture. Walls which were less than five feet were stripped and finished on the same day.

“A lot of contractors don’t do that, however, in doing so, we get a more consistent finish on the concrete when we strip and finish decorative concrete walls the same day,” Boyer says.

According to Boyer, the biggest challenge of the project were the multitude of parallel saw cuts, over 16,700 lineal feet which would provide the linear hardscape design.

“We focus a lot on controlling cracking. We work with the design team and submit shop drawings, something most decorative concrete contractors don’t do, but they should,” he says. “We take the design and recommend ways to minimize shrinkage cracking and improve the concrete paving as a whole.”

Since the design itself was very lineal and many of the joints were placed in a longitudinal direction, Boyer said he recommended adding transverse joints to break it up in smaller areas. “Architects don’t want to interrupt the design with cuts, but we try to minimize the disruption to their design and always explain that a joint is far better than a crack.”

Saw cuts
“A big challenge, especially in concrete, is to have a long straight line,” Boyer says. “You’re cutting a 600 foot straight line and you’re making multiple [concrete] placements between the starting point and the ending point.”

The whole job was based on a grid, which should have made the project easier. However, as Boyer notes, “another significant challenge in decorative concrete is to maintain a square—parallel and perpendicular lines—that extend for several hundred feet.”

To make the saw cuts accurate, Trademark's crews utilized a total station unit. He says, contractors should embrace technology to assist with consistency throughout the project. "Often we'll have to make adjustments with the building as it is not always in line with the paving portion of the project. In that situation, we rely on the total station unit to keep things uniform and consistent."

Boyer's team hand cut all joints by hand using a circular saw on rollers outfitted with diamond blades. "We don't use a large walk-behind saw. We have a team of dedicated craftsmen who saw cut the joints and they are great at it."

Samples and shop drawings
Making samples of the potential work, providing site mockups and utilizing shop drawings of the project have been key factors to the success Trademark Concrete Systems Inc. has achieved. As an architectural concrete contractor, color and texture play critical roles in the projects the firm chooses to build.

In the case of this project, the architect was looking for a higher value concrete but not necessarily at a higher cost. Trademark submitted a series of samples for consideration which included the Feldspar reflective aggregate.

Making samples is a regular practice for Trademark. The samples are used to offer assistance with the visualization of the project. In fact, he says the firm makes and distributes well over 500 samples a year in the Southern California marketplace.

"We visit with the architects at the front end of the project, helping with the design. We want to be an information hub for architects and landscape architects, it's very important," Boyer says. "I think contractors tend to be more reactive, and ask 'Why should I make a sample if I don't have the job?' Well, you make the sample to show people what you can do. It helps you get jobs like this one and it helps you separate yourself from the competition."

The other key to Trademark’s success is the use of shop drawings during the preparation stage of the project. Boyer says his team typically coordinates the civil engineering plans, the architectural plans and landscape plans and incorporates the information into a shop drawing. He says the shop drawing is a great communication tool when performing the work. There are no surprises for the work that is expected to take place, nor are there any questions as to what is being called for in the design plans.

“A contractor can learn a lot working with design professionals,” Boyer says. “They look at concrete differently than we do. And I think they (architects) push contractors to be more creative. But the relationship also gets the contractor involved on the front end of the project. It separates you from your competition and gives you more credibility. Contractors often complain about the specifications on a project but I have to stop and ask – ‘What are we doing about it?’ If the contractor can be an advisor to the architect, it makes the whole industry better. This is exactly why more contractors should be involved in the American Concrete Institute. When you get involved, you’re growing the industry. Contractors are good mechanics, but not necessarily designers. The partnership between the contractor and the architect creates a position to educate the design professional. We can talk to them about the things they can do with concrete, and of course, tell them how to achieve it. As a contractor, that’s our responsibility to make the industry better.”