Jessica Ledger-Kalen, owner of Royale Concrete and Mike Denny, owner of Artistic Concrete Surfaces (ACS), joined forces when faced with an outstanding, yet very challenging, opportunity that exceeded either of their individual capacities. 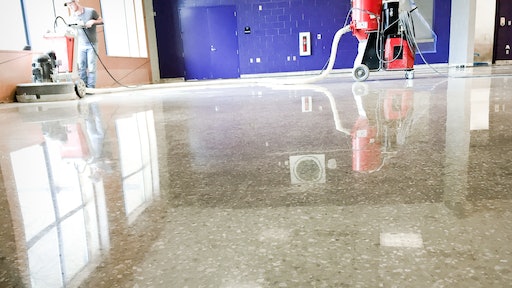 Jessica Ledger-Kalen, owner of Royale Concrete of Iowa and Mike Denny, owner of ACS: Concrete Construction of Kansas had no idea that a friendship forged at a C.S.D.A. certification class would manifest itself in the development of a partnership that has resulted, not only in profits, but in industry praise.

“Mike and I hit it off during the C.S.D.A. ST-115 certification program because we both shared common values as employers and experienced concrete contractors,” Ledger-Kalen says. “Our goal at Royale Concrete is to only accept jobs for which we are one-hundred percent confident we can deliver outstanding quality and service. Our focus is absolutely about customer satisfaction and the more I got to know Mike, the more I could tell that ACS was grounded with that same foundation.”

When Ledger-Kalen and Denny identified the opportunity to work on a large, multiple building concrete polishing contract for the Blue Valley (Kansas) School District, they knew this was the chance they had been waiting for to capitalize on their relationship and their company assets to do something that alone, neither had the capacity to tackle.

“I grew up in the Blue Valley School System and had been working with the schools for some time to convince them that polished concrete was the best flooring solution,” comments Denny. “When they invited us to bid on a bigger, multi-school job, I recognized that while ACS couldn’t do it alone, we could pool resources with Royale Concrete to successfully complete work on time and to their high quality standards.”

The Blue Valley job design and specifications included difficult-to-meet standards, multiple general contractors and a tight timeline. The Royale Concrete/ACS Construction team worked closely with the architect to find a way to achieve the results while building a relationship with both the architect and the school system to manage expectations for future project. The team also worked with Husqvarna on their specifications to get all parties on the same page.

Royale Concrete and ACS: Concrete Construction were charged with polishing the large aggregate exposed floors of three school buildings to a 3,000 grit Hiper Flor. The existing canvas was a challenge given age, condition and irregular lay out. The floors, in some areas required double and triple density as well as GM grout filler. Being school buildings, there were dozens of different doorways with lots of challenging crevasses and awkward spaces between walls and columns that had to be polished by hand.

The companies started the progressing of tooling off with bush hammer tooling that we were testing in an attempt to expose large aggregate quicker per the customer’s preference. Then progressed in metal grinding steps, transitional tooling, and finally polishing to a 3,000-grit finish. The floor presented inconsistently with different degrees of porosity throughout the floor and several tight obstructions which made it difficult to expose large aggregate in all areas. The contractor used GM3000, filled joints with Versaflex SL 75, and used Versaflex tinted Quickmender to fill small repairs as well as cementious repair using Rapid Set Cement. Corner polishing was extensive with doors and many angles through the project.

Collaboration wasn’t always easy, both Ledger-Kalen and Denny admit, but the trick, Ledger-Kalen explained, was that both parties had a clear understanding from the start about roles and responsibilities. Royale Concrete accepted the project planning role and conducted weekly meetings with the ACS team to be sure everyone was aware of each other’s efforts and that the project was on schedule. The companies pooled resources to procure materials in order to get the best deals and dispatched employees on a schedule that enabled both companies to continue running other smaller individual projects simultaneously.

“We acted as one company,” Ledger-Kalen explains. “There was never a feeling of competition, quite the opposite in fact. We deployed workers, ordered materials, tracked expenses and divided profits as one entity from the start. Not only did we accomplish more by working together, we also learned a lot from one another. Our employees enjoyed working together and we truly feel that both companies have been strengthened from this effort.”

Upon project completion, ACS: Concrete Construction applied for and was awarded a 2016 Polished Concrete award from the Concrete Promotional Group of Kansas City. “My team was incredibly proud of the high quality results we achieved at Blue Valley,” Denny says. “We were excited to showcase our work, and that of our Royale Concrete partners. We hope to be an example to others to demonstrate that competitors can truly work together to accomplish outstanding results.”

“I have a great deal of respect for Mike and his team,” Ledger-Kalen says. “We’ve created a good partnership and I’m confident we’ll continue to build on that in the future.”

As Founder, President and visionary of Royale Concrete located in Fairfield, Iowa, Ledger-Kalen leads a customer-oriented team that delivers high-quality concrete flooring solutions and exceptional customer service to commercial and governmental entities. Ledger-Kalen currently holds the position of Concrete Polishing Chair on the Concrete Sawing and Drilling Association (CSDA) Polishing Committee and sits on the Concrete Polishing Council for the America Society of Concrete Contractors (ASCC). She is also a member of the Southeast Iowa Builders Association.

President of Artistic Concrete Surfaces, LLC [ACS], in Spring Hill, Kansas, Mike Denny leads his small business with the breadth and experience of a concrete enterprise. Having founded ACS in 2005 with his father, Don Denny, after a lifetime of work in construction, Mike has also served as president of the local Concrete Promotional Group, is actively involved in the American Society of Concrete Contractors, American Concrete Institute, Concrete Polishing Association of America and Concrete Sawing & Drilling Association. Leading by example, under-promising and over-delivering, Mike has created a youthful & versatile design-build firm that is ever-changing in today's fast-paced world. What never changes, is ACS' quality, and ingenuity.