Pushing on the Boundaries of Artistic Concrete

Transitioning from being a machinist to a decorative concrete contractor. 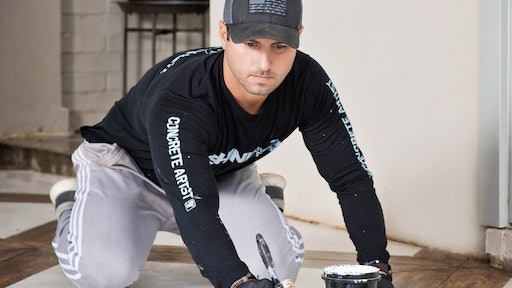 Keefe Duhon started as a machinist but became intrigued with decorative concrete and ended up starting his own decorative contracting company. His love for creative expression was a strong motivating factor.
Robin Borne

Keefe Duhon was a machinist in New Iberia, Louisiana. He says it was all he really ever wanted to be and he got a job working for a company owned by a friend, working long and late hours. There were some creative aspects to his work and he enjoyed that part of his job the most. Then he went on a family vacation to Florida and while his family was waiting for service at a restaurant and he happened to notice all the decorative concrete there, particularly a stamped wood plank patterned floor. He was intrigued by what he saw and decorative concrete stayed in his thoughts. When they returned home he began experimenting with concrete in his backyard, especially with wood grain patterning. He gradually discovered ways to use a pool trowel to create unique textures and wood graining effects and he liked the creative results much more than just stamping patterns in concrete. This led to doing small projects in the area and he started getting calls from people who had seen his work, wanting him to install work for them.

As he started getting more decorative concrete work he began to realize that he had to make an occupational decision—continue to be a machinist or become a full time decorative concrete contractor. He said his wife was terrified at the thought of his leaving a secure job with health insurance and benefits, especially at a time when they had a baby on the way. His said he kept thinking “I can do this” and finally based his decision on that thought. He gave his two weeks’ notice to his friend and he started his own contracting company which he called “Concrete Revolution.” From that point on “We never looked back,” he says and he has always been blessed with a lot of work.

From the beginning the centerpiece of his work was wood-grain patterning using a trowel and other readily available tools to produce work with no repeat patterning and a wide range of colors and textures. “No one was doing concrete wood patterning in my area and people around New Iberia really liked the look, so from the beginning I had plenty of work,” he says. It also appealed to his creative spirit. “I am at heart an artist,” he says, “It’s in my blood.”

His R&D work continued. He experimented with ways to achieve new wood patterns, coloring techniques, and materials. He photographed one of his installations and put the photos on Facebook. In the first day he got over 50,000 “hits” he says and it made him realize there was a lot of interest in what he was doing.

Next, he began to experiment with overlay cement systems, especially liking products that used white portland cement in their mix because added coloring was more vibrant. Discovering overlay cements and thin toppings was a game-changer for him and it is mostly what his company does now. His products of choice are SureCrete, Kingdom Products, and Stone Edge.

Here are the basic steps in his process:

Substrate preparation. Installing overlay cement starts with properly preparing the base. Duhon always grinds the base concrete using diamond tooling as the first step. Base concrete must be clean, open concrete with no dust present.

Cracks. Base concrete should be free of cracks and pot-holes. When a slab has cracks Duhon uses a poly urea product to close cracks. Depressions and holes are mended with overlay patch material.

Base coat. a first application of overlay cement is applied with a Magic Trowel

Cutting pattern lines. Duhon cuts the lines between planks with a diamond saw

Sanding. The entire surface of the work is sanded to remove any unwanted projections of overlay cement and the work is carefully vacuumed.

Coloring. Duhon always applies multi-colors after the overlay cement is hard. He applies several water based coloring materials to achieve the desired look. He says he doesn’t use acid-etch stains because he wants to see what the colors will look like as he applies them. He starts with light colors and finishes with the application of dark colors.

Because most of his company’s product focused is more on overlay decorative concrete work now, substrate preparation became an important issue and in 2016 Duhon decided to introduce his own line of polishing and floor preparation grinding equipment. He called this new company “Maverick Surface Preparation.” Because he personally has had a lot of experience using the equipment he was able to design machines with the features he personally wanted. It was also an opportunity for him to use his machinist skills during the R&D process and he thinks the results are cutting edge and cost efficient. His company makes equipment that serves the 18 to 30 inch diameter market and he says the current market is about 50-50 wet and dry applications. His company has established a national sales and rental distribution network and he says they will have a booth at the World of Concrete coming up. Duhon has also developed their own diamond tooling products.

Approximately two years ago Duhon decided to start a website dedicated to training people who wanted to learn more about decorative concrete techniques—especially the techniques that he has worked out with his own company. After his first year he decided to include his friend Bob Harris and his wife Lee Ann as partners in the business. The name of this new business is “Behind the Trowels” and its website has product manufacturer sponsors. Decorative contractors who wish to learn new techniques can purchase programs from the websites video archive, sign up for training videos, or pay to take live online classes in real time where there is also the opportunity to ask questions. Participants can get training help from anywhere in the world. Their website also has an archive of all their training sessions so people can purchase videos on selected topics. Duhon says he prefers to focus on techniques and finishes for installing a wide variety of work.

Duhon describes himself as a restless soul, always working on new floor finishes and spending significant time on research and development. His goal is to design cutting edge new finishes. To this end his company offers customers “CR Heritage” coloring and finish techniques. It expands the companies decorative product line well beyond wood finishes. He says his goal as an artisan for CR Heritage was to develop finishes that others can install.

Duhon sees a bright future for his Maverick Surface Preparation company as diamond polishing continues to grow in popularity. Polishing is currently about half of his Concrete Revolution companies business.

Given Duhon’s desire to focus on research and development and the creative exploration to develop new finishes, he has had to place trusted employees in positions of leadership to handle the organization and day-to-day details of running his businesses. He recognizes that they provide him with the freedom to follow his creative passions.

As his businesses grow and get more complicated Duhon says one of his significant accomplishments has been not to stress or freak-out about all that is going on, he is more able to take things in stride now.

His current most creative project is one he is doing for himself. He calls it the Grotto and it includes a large concrete rock display next to a swimming pool. He designed and built it with the help of other known decorative artisans which included Troy Lemon, Warren Neff, Joshua Russell, and Mark Hodges. The idea started with a clay model, followed by engineering to secure a permit to build it. The finished work includes a swimming pool with a tanning area at the top of the rock structure, a waterfall to the bottom pool, a grotto that features a hot tub and a TV room, a below water level fire pit, and water spillways. After many months of work the project is now complete.