Though thoroughly modern in form, Lahofer Winery in Dobšice, Czech Republic, takes cues from the vineyards of old. 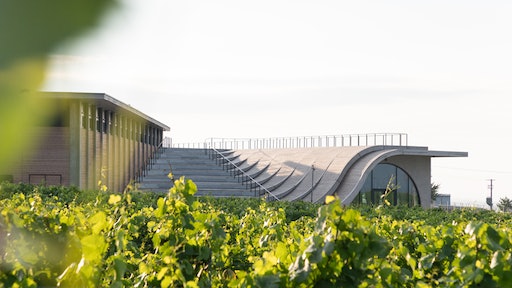 The view of Lahofer Winery from the vineyards.
Alex Shoots Buildings

MetropolisMag.com recently published a story about the Lahofer Winery in Dobšice, Czech Republic, which opened in June. The picturesque winery was rebuilt with concrete for long-lasting sustainability.

“We are in the field, we are in a vineyard in the middle of nowhere; once you want to build something solid here, you have to pick solid materials,” says architect Michal Kristof, explaining the bold choice. “Even the brick was not solid enough. Stone, it’s out of our budget, so we picked the concrete because it’s an artificial stone.”

If the sloping roof echoes traditional winery design, the concrete ribs that line it are a continuation of the vineyard’s striped pattern, says architect Ondrej Chybik. Their aim was to architecturally re-create the visual effect of standing in a vineyard, where trees are planted in even rows.

The original plan was to line the ceiling in wood, exposing only the ribs of each arch. But once the concrete was poured, Kristof recalls, “I realized how stupid we were in terms of hiding this beauty of the concrete.”

There was a small complication, though: The concrete was of structural rather than finish quality and showed chemical stains and efflorescence. 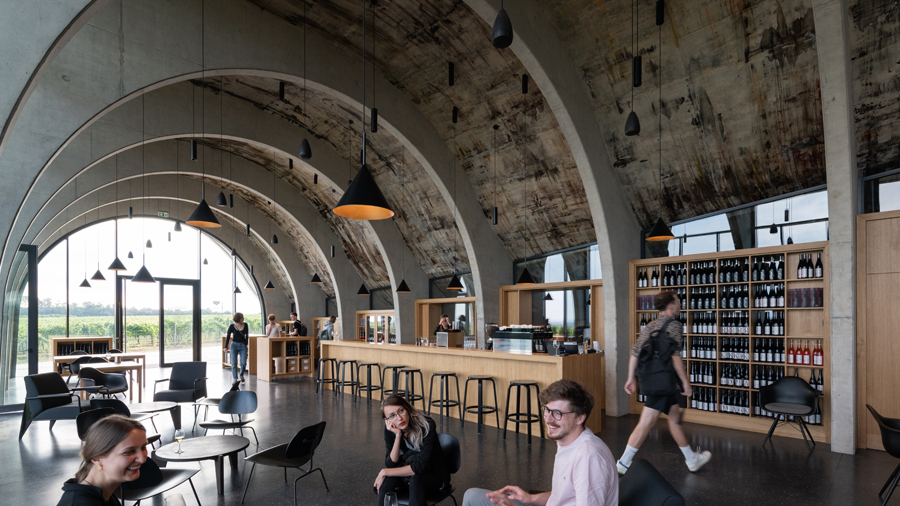 The ceiling details inside Lahofer Winery combine the natural finish of the concrete and artwork by Patrik Hábl.Alex Shoots Buildings

“It looked like a mistake or like a not-well-done construction,” he adds. “But on the other hand, it looked like artwork from Patrik Hábl … so we asked him to merge his artwork with the chemical reactions,” Chybik says.