The WerkMaster COLOSSOS helps with grinding and polishing of over 23,000 square feet of concrete for the Comedy Carpet in England 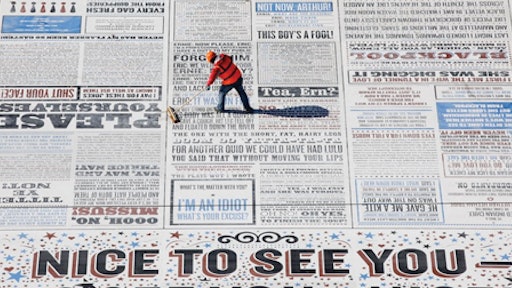 The Comedy Carpet was over 23,680 square feet of outdoor concrete with over 160,000 individually cut granite letters embedded in the concrete.

Grind and polish over 23,680 square feet of outdoor concrete with over 160,000 individually cut granite letters embedded in the concrete.

The Comedy Carpet has over 160,000 individually cut granite letters embedded in concrete and covers a staggering 2,200 square metres (about 23,680 square feet) in front of the Blackpool Tower on the Tower Festival Headland in Blackpool, England.

The Blackpool Council commissioned artist and creator Gordon Young to design and implement this huge undertaking. The project needed a machine that could grind and polish both granite and concrete simultaneously, while removing lippage and maintaining an extremely flat floor. The machine of choice to tackle this difficult project was the WerkMaster COLOSSOS. WerkMaster’s patented Octi-Disc Technology combined with its Ultra Flex Plug ‘N Go tooling system proved to be a perfect solution for the project.

Once the granite letters were selected the design was laid out in various slabs. In addition to the sheer size of the project, the design also incorporated white, black, red and blue colored concrete. After the letters were in place, each color of concrete was poured separately. The slabs were then transported and placed on the jobsite.

Once in place, the grinding and polishing began with special attention paid to the edge of all the slabs to remove any lippage. On the final days of the project, the contractor used a WerkMaster Titan to help finish the polish.

The finished project is one of Britain's largest pieces of public art and celebrates the contribution to comedy featuring the work of over 850 of Britain’s best comedians and writers of British comedy.