Guard, Gloss and Distinctness of Image 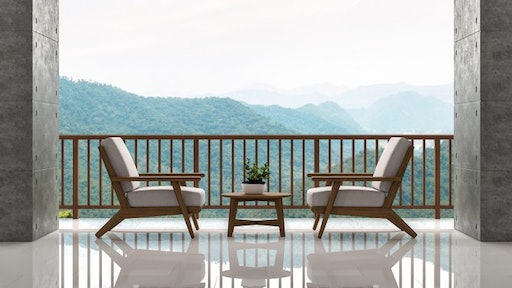 Haze is a common problem associated with coatings and polished materials. Rhopoint Instruments' Concrete Clarity Meter (CCM) digitally reads the concrete surface profile, the sharpness of the reflected image, and the haze resulting from concrete imperfections, which gives a true representation of the finished floor.
Text and images reproduced with the permission of Rhopoint Instruments Ltd.

Concrete has been widely used as a building material for centuries, but in relative terms, modern polished concrete is barely out of diapers. Polished concrete, as a finished floor system, burst onto the scene as the latest and greatest in sustainable decorative floors in the early 2000s, and the polished concrete industry—from tooling to chemicals and grinders to means and methods—has evolved at a breakneck pace over the last two decades.

In the beginning, the polished concrete world consisted of a handful of specialty contractors, and concrete was ground systematically. Contractors started with low grit metal bonded diamond tooling and brought the floor up through consecutive steps to the desired finish. If the initial cut required was based on a 40-grit metal bonded diamond and the final desired finish was a distinctive high shine floor, which called for a 3000-grit resin bonded diamond, that floor would be touched with a grinder throughout a nine-step process. Quality contractors didn’t skip steps, and discussions revolved around honing the floor as if it was high-end furniture requiring systematic grits of sandpaper. A quality floor took experience—and most importantly time.

Those first floors were beautiful and sparked by a natural glow from within. The floors had all the resiliency and sustainability of concrete and an unheard-of life and maintenance cycle as compared with other commercial floor finishes.

Though silicate-based sealers were still a part of the initial grind system, Pentra-Guard was designed to be applied to a finished polished floor. The revolutionary guard product formed a micro-thin film on top of the finished floor, which both increased shine and created a barrier to retard stains and abrasions to the concrete floor surface. Other manufacturers quickly followed suit and soon, guard products were being produced by several chemical manufacturers. Many of these new products suggested heat activation through high speed burnishing to create a high shine.

These guard products solved several of the big box problems. High shine floors were now possible without the extensive polishing steps previously required. A contractor could cut down to 4-6 steps of diamonds, apply guard and burnish to completion. The resulting floor had the look of traditional polished concrete with the guard products creating high shine and hiding minor scratches or abrasions.

Eventually, the architects and engineers affiliated with big box retail developed a measurable and quantifiable level of shine in requiring a specific gloss level for the finished floor. Using guard products, contractors were able to meet the required surface gloss specification.

Guard products launched polished concrete into the mainstream. Polished concrete was now more affordable, with manufacturers producing great products to meet the demands of end users. Contractors were able to produce high shine floors in far less time and at far less expense. But, there’s always a catch, and herein lies the rub.

Guard products create a topical wear surface on the concrete floor. Over time, that wear surface will require re-application, whereas traditional polished concrete had no wear surface. Gloss meters only measure the light reflectivity on that same wear surface, and as the surface dulls with use, so does the shine. Overuse and misuse of guard products became rampant in the industry, and contractors leaned on guard as a crutch to create shine. Less and less attention was paid to the mechanical concrete polish as long as the shine at project completion met the required gloss meter reading.

The Concrete Polishing Association of America (now the Concrete Polishing Council of the American Society of Concrete Contractors) quickly recognized that a traditional polished concrete floor was a different animal than a polished floor that relies on guard products to produce shine. While both fill specific needs in the marketplace, a quantifiable and measurable scale was needed to establish a benchmark for the world at large.

As a result of an extended search, the CPAA discovered the Distinctness of Image (DOI) meter, which was used widely in the automotive paint industry. In contrast with just reading surface light reflectivity in the form of gloss, the DOI scale combines readings that are a true representation of the entire surface. DOI not only looks at a concrete surface but defines the characteristics of looking into a concrete surface. DOI meters and the DOI scale define DOI gloss as the sharpness of objects as a reflected image and consider haze as a quantifiable measurement.

Furthermore, Rhopoint Instruments has developed the Concrete Clarity Meter (CCM), which digitally reads the concrete surface profile, the sharpness of the reflected image, and the haze resulting from concrete imperfections, which gives a true representation of the finished floor. And in 2017, the Concrete Polishing Council produced the Polished Concrete Appearance Chart, which in concert with a DOI meter, gives a true representation of the quality of a polished concrete floor.