Understanding abrasives when polishing concrete will allow you to provide a better product in a more efficient manner. 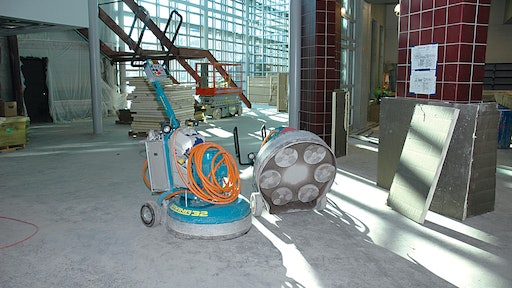 Abrasives are the most important tool for mechanically processing concrete to a polished finish. They come in many forms, shapes and sizes and are made out of various materials whose bonding varies in hardness.

There are multiple variables and conditions that need to be considered when choosing your abrasives, including physical make up and the conditions they will be used under. The manufacturer of the abrasive should be able to give you guidelines on how their abrasives best work under certain conditions.

Always keep in mind the material you are abrading (concrete and aggregate, glues, mastics, coatings) has to work together with your abrasive. Not using abrasives properly will affect both their performance and life. Here are five additional factors to consider when choosing the right abrasive:

Weight. The weight over the abrasives will affect how they function. Too little weight and the abrasive will not cut efficiently or properly; too much weight may cause excessive wear. Too much weight over resin bond abrasives may also cause resin transfer resulting in a floor whose polished appearance may not be the result of the mechanical process but the result of creating a layer of shiny resin.

Tread. The tread or face of an abrasive comes in several different styles. You can have two different types of abrasives both being 100 grit. One 100 grit abrasive may have twice as much surface contact than the other. Although they may both be 100 grit, the one with less surface contact will be more aggressive in how quickly it cuts and will also take longer to create a fully refined scratch pattern.

Speed. The speed at which equipment moves over the surface in a linear motion will dictate how well the abrasive abrades the surface. Moving the machine too fast will not allow the abrasive to create a consistent, tight scratch pattern. Moving too slowly with an abrasive typically below 50 grit may cut too quickly and remove more than intended.

Understanding abrasives will allow you to provide a better product in a more efficient manner and give you the know how to effectively work with all the various types of concrete you encounter in the field.

Editor's Note: This article has been updated from the original version, which first appeared in the January 2010 issue of Concrete Contractor.

Not All Diamond Abrasives Are Created Equal