Bob Harris Will Give Keynote Address at 2012 Concrete Decor Show 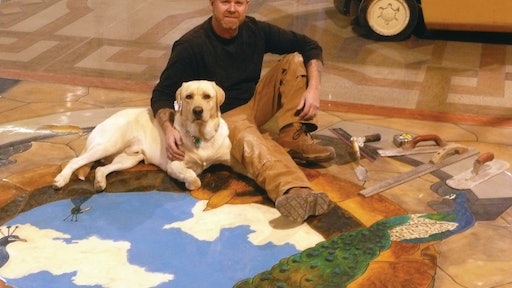 The Concrete Decor Show is pleased to announce Bob Harris of the Decorative Concrete Institute (DCI) as the keynote speaker on Tuesday evening, February 21, at the Henry B. Gonzalez Convention Center in San Antonio, Texas. As part of the Welcome Reception and Awards Program, Harris will discuss "Going the Distance with Decorative Concrete." While sharing his insights on the challenges faced by the decorative concrete industry and how we can make the most of the growing popularity of decorative concrete globally, Harris will discuss trends and changes he foresees on the road ahead.

ConcreteIDEAS.com is sponsoring the keynote speaker.

When Bob Harris was inducted into the Decorative Concrete Hall of Fame in 2010, Bent Mikkelsen, CEO of Professional Trade Publications and publisher of Concrete Decor magazine, said this in his introduction:

"Bob Harris has changed our expectations of training for decorative concrete and set new standards. With a quest to continuously improve his craft, he reached out to learn from artists, muralists, faux finishers and other artisans to bring a fresh way of looking at decorative concrete that has benefited all of us. He had the good fortune to work on Disney properties where creative uses of concrete and attention to detail were pushed as far as possible, and he generously shared the perspective and skills he gained through outstanding training programs throughout the United States and in Canada, the Caribbean, Germany, England, Greece Indonesia, Ireland, Italy, Mexico, South Africa, Spain — to name just a few. As an independent trainer, he published Bob Harris' Guides and DVDs, popular bestsellers that have improved the quality of work in decorative concrete."

With his depth of experience and passion for quality, Bob was not satisfied with the state of existing tools and materials on the market. In 2009, he introduced a new line of exceptionally realistic stamping tools called Palladiano -Wonders of the World, distributed through Brickform. The patterns replicate historic stone and rockwork, and were produced by making and refining molds at historic European locations. In 2010, DCI introduced Terra Fresco by Bob Harris, a versatile skimcoat line and coloring system distributed by Kemiko.

Bob is also the official spokesperson for Surface Gel Tek.

Bob's pedigree in concrete is far-reaching. Starting at the age of 3, he learned the fundamentals of good concrete practice from his father, Robert J. Harris. In the mid 1990s, after working six years supervising "themed" concrete installations on Disney properties, he became director of product training for a large materials manufacturer. Bob conducted hands-on architectural concrete training and became the go-to guy for technical support. He carried out product trials for research and development. His passion for sharing his experiences with seasoned veterans and beginners around the world led him to form Decorative Concrete Institute in Temple, Ga. There, he conducts training in his own showroom and training facility and in locations around the world. A full schedule of his workshops is available on his website.