How to Install Vapor Retarders

Proper design, selection and installation of below-grade vapor retarders are keys to a successful concrete floor. 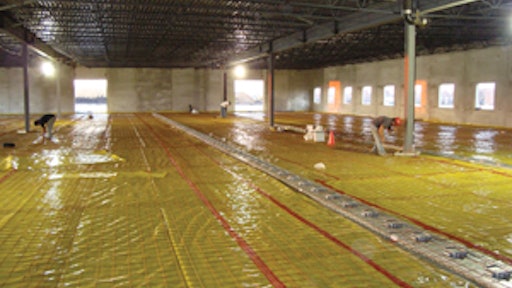 Think of a vapor retarder as though it were an imaginary "bathtub" that should hold water if filled. Repair any tears and tape up areas around conduits and pipes.

Vapor retarders are sheet materials used below slab-on-ground floors to limit the amount of moisture that migrates into and upward through concrete slabs. If unchecked, moisture can cause floor adhesive, covering and coating failures, growth of mold and mildew, offensive odors, and unwanted increases to interior humidity levels. For health reasons, most local building codes require the installation of a vapor retarder below on-ground concrete slabs in inhabited spaces. To protect human health and to minimize moisture-related flooring failures, all concrete floors in contact with the ground must have a vapor retarder below the slab, regardless of the depth of the water table.

Vapor retarders are often called vapor barriers. However, vapor retarders and barriers are not the same. Vapor retarders, as the name implies, only retard the migration of moisture; whereas, vapor barriers essentially stop the ingress of moisture. According to ASTM E 1745-09, vapor retarders must have a permeance rating (water vapor transmission rate) less than 0.1 perms. By definition, 1 perm equals 1 grain per ft2 per hour inch of mercury pressure differential. A permeance rating of 0.1 perms is equivalent to an approximately moisture vapor emission rate (MVER) of 0.142 pounds per 1000 ft2 per 24 hours for a slab exposed to a 70° F and 50 percent relative humidity (RH) environment at the top and 50° F and 100 percent RH at the bottom. A MVER of 0.142 pounds per 1000 ft2 per 24 hours is considerably less than the maximum MVER of 3.0 pounds per 1000 ft2 per 24 hours typically specified by manufacturers of moisture-sensitive flooring.

True vapor barriers should have a permeance rating of 0.00 perms; however, it is generally accepted in the industry that materials with a permeance rating of 0.01 perms or less are vapor barriers. Converting 0.01 perms to an equivalent MVER, as above, yields a value of 0.014 pounds per 1000 ft2 per 24 hours. Although both MVER values are small, there is a difference between vapor retarders and barriers. Traditionally, vapor retarders are more frequently used below ordinary on-ground floor slabs than vapor barriers.

Thicknesses of vapor retarders satisfying the requirements of ASTM E 1745-09 typically vary between 10 mils (0.010 inch) and 15 mils. Increased thicknesses offer increased resistance to moisture transmission and provide additional durability during and after construction. When heavy equipment such as ready mix trucks, laser screeds or concrete buggies will be operating on the vapor retarder, use a 15 mil thickness.

When required, building codes call for polyethylene vapor retarders with thicknesses of at least 6 mils to be placed below on-ground concrete slabs. However, most conventional polyethylene materials typically do not meet all the requirements of ASTM E 1745-09 and have a history of poor performance when used below floor slabs. Many conventional polyethylenes, especially recycled ones, do not have the tear and puncture resistance necessary to withstand normal construction activities, may become brittle and decompose over time, and lack the necessary impermeability to protect moisture-sensitive flooring. ACI 302.1R-04 strongly recommends that vapor retarders be in compliance with ASTM E 1745-09 and have a minimum thickness of 10 mils. In many cases, satisfying the minimum building code requirement with a 6 mil polyethylene may not relieve the designer or contractor from damages associated with flooring failures and mold.

Should concrete be cast on a granular base placed over the vapor retarder or directly on the vapor retarder? The answer to this question has been debated for years because there are benefits and risks associated with each option.

Finishers prefer to cast the concrete directly on a granular base placed over the vapor retarder because the base acts like a "blotter" and absorbs mixing water. Reducing mixing water shortens the bleeding period and may increase the stiffening rate of the fresh concrete which allows the finishing operations to start sooner. Additionally, casting concrete on a granular base instead of the vapor retarder may reduce the risk of: tearing and puncturing the vapor retarder, surface blisters and delaminations associated with a prolonged bleeding period, subsidence cracking over reinforcement, slab curling, and cracking caused by plastic and drying shrinkage.

The granular base should be a 3- to 4-inch-thick layer of a trimmable, compactable and self-draining material. Do not use concrete sand because the compacted surface will not hold up to normal construction activities. Irregular and rutted base surfaces cause irregular floor thicknesses and increase the risk of random slab cracking.

Casting concrete directly on the vapor retarder isolates the concrete from external moisture sources and reduces the potential of creating a water reservoir in the granular base layer. Concrete cast directly on the vapor retarder typically dries faster than concrete cast on a granular base enabling the flooring to be installed sooner. Therefore, the drying period to reach the often-specified MVER of 3.0 pounds per 1000 ft2 per 24 hours is shorter. More importantly, this option eliminates the risk of creating a moisture reservoir in the granular layer below the slab that can provide a constant source of moisture leading to moisture-related flooring problems for the life of the building.

When concrete is cast directly on the vapor retarder, all of the excess mixing water rises to the surface prolonging the bleeding period. Extending the bleeding period delays finishing and may increase the risk for the occurrence of other concrete problems including surface blistering and delaminations, subsidence cracking over reinforcement, slab curling, and random cracking.

For the vapor retarder to work as intended, it must be vapor tight, not just water tight. All seams, penetrations, tears and punctures must be properly sealed or repaired. During the final inspection, prior to placing the granular base layer or concrete, inspect the vapor retarder as though it were an imaginary "bathtub" that should hold water if filled. Locations where water would leak out are actually locations that will allow moisture vapor from the ground to enter the granular layer or the concrete slab. Even 5/8-inch-diameter stake holes and small tears from reinforcement chair legs can allow enough moisture to enter the concrete to cause localized flooring failures.

Before rolling out the vapor retarder, ensure the finished surface of the granular base is dense, smooth, level and at the specified elevation. Remove wet spots and repair ruts or depressions caused by construction activities. Roll out sheets of the vapor retarder in the direction of the planned concrete placement. Overlap seams a minimum of 6 inches and completely seal with special below-slab sealant tape. Placing concrete in a direction parallel to the seams will help prevent fresh concrete from damaging the tape and getting under the overlaps.

Exercise special care when sealing the sheeting around penetrations such as conduits, ducts and pipes. Overlay and tape a separate piece of the vapor retarder to match the diameter of the pipe and wrap sealant tape around the pipe to achieve a vapor-tight seal.

At construction joints, overlap the vapor retarder at least 12 inches and be sure to completely tape all seams and repair all stake and other holes; otherwise, water vapor can migrate from the ground into the granular base or concrete causing localized moisture-related flooring problems.

An understanding of how vapor retarders work and a comprehensive grasp on proper installation methods will help concrete contractors complete a successful concrete floor.

How to Avoid Adhesive Angst